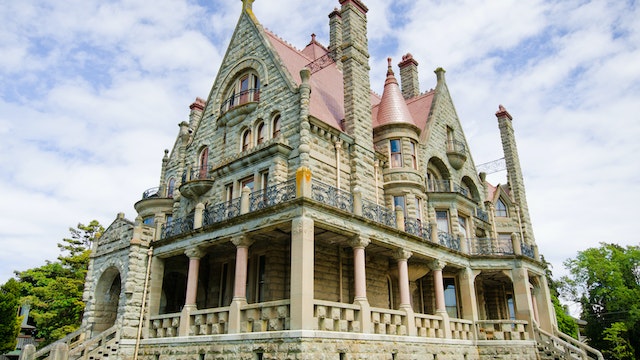 More ostentatious country mansion than fortified castle, Craigdarroch, with its turrets, stained-glass windows and palatial interior, looks like it might have been teleported over from the Scottish Highlands. Beautifully preserved by a local historical society, the interior is filled with rich period detail and notable for its spectacular wood-paneled staircase that ascends from the entry vestibule. You’ll need at least an hour to admire the four floors of rooms, including a dining room, smoking room, billiard room and dance hall.

Surrounded today by an attractive assemblage of lesser mansions in a Victoria suburb, Craigdarroch once stood on 28 acres of woodland. Built in the late 1880s, it drew its architectural inspiration from a medieval Gothic style known as ‘Scottish Baronial’, then experiencing a Victorian revival.

The property is also interesting for the complex family dramas that once played out here courtesy of the feuding Dunsmuir clan, led by a Scottish coal-mining baron named Robert Dunsmuir who died before the house was finished. One room is dedicated to telling the Dunsmuir story: the family lived here until 1908 and their squabbles over money and inheritance became legendary. Before you leave, climb the tower's 87 steps for distant views of the Olympic Mountains.