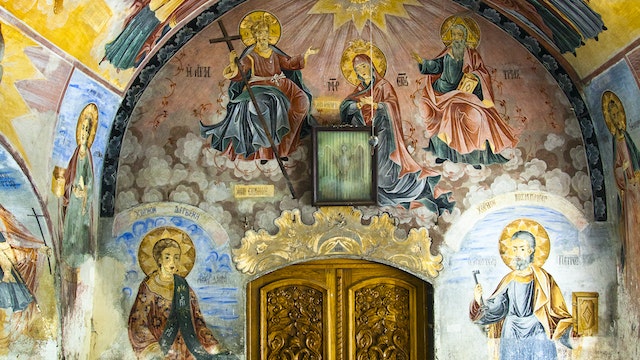 About 30km south of Plovdiv stands the magnificent Bachkovo Monastery, founded in 1083. Most of the complex dates from the 17th century onwards, with the Church of Sveta Bogoroditsa (1604) as its colourful centrepiece. The church is decorated with 1850s frescoes by renowned artist Zahari Zograf and houses a much-cherished icon of the Virgin Mary. More beautiful murals can be found in the former refectory.

The monastery was founded by Georgian brothers Gregory and Abasius Bakuriani, aristocrats in Byzantine military service. It flourished during the Second Bulgarian Empire (1185–1396) but was ransacked by Turks in the 15th and 16th centuries. Major reconstructions began in the mid-17th century.

Inside the Church of Sveta Bogoroditsa, note the cupola featuring a beautiful mural of Christ, the 17th-century iconostasis and the icon of the Virgin. Believers claim that this miracle-working icon was painted by St Luke, though art historians date it to the 11th to 12th centuries. Pilgrims regularly pray before the silver- and gold-encased Madonna; if you see queues, it is likely to be a line to place items before the icon to be blessed.

The monastery’s southern side houses the former refectory, dating to 1601. This is well worth visiting for the extraordinary frescoes (1643) relating the monastery’s history. A gate beside the refectory leads to a (rarely open) courtyard; this leads to the Church of Sveti Nikolai (1836). During the 1840s, Zograf painted the superb Last Judgment inside the chapel; note the condemned, nervous-looking Turks on the right and Zograf’s self-portrait (no beard) in the upper-left corner. A small museum of icons also opens when there is sufficient demand.

Around 50m from the monastery entrance, the restored 11th-century ossuary features wonderful medieval murals. Ask staff to open the doors. A prominent explanation board provides monastic history (in English, French and German), and a map of hiking trails to nearby villages.

Bachkovo Monastery offers rooms (10 lv to 15 lv per bed) but be aware that only married couples can share a room and some travellers report being turned away. Enquire upstairs in the reception office or, better yet, online in advance.

Take any bus to Smolyan from Plovdiv’s Rodopi bus station (5 lv), disembark at the turn-off about 1.2km south of Bachkovo village and walk about 500m uphill. There are also direct buses half-hourly (6 lv).