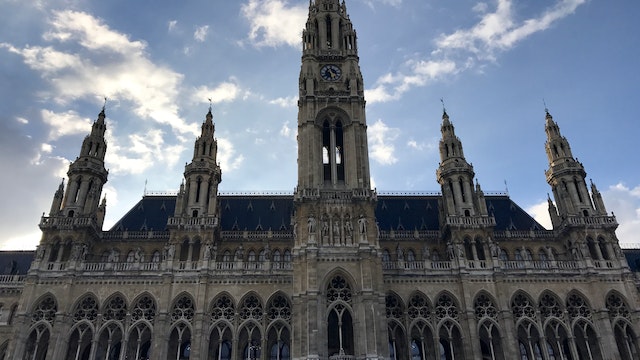 The main spire is 102m high if you include the pennant held by the medieval knight, or Rathausmann, guarding its tip.

Guided tours lead through the Arkadenhof, one of Europe's biggest arcaded inner courtyards, and the barrel-vaulted Festsaal (Festival Hall), which hosts the Concordia Ball in June. Look for the reliefs of composers Mozart, Haydn, Gluck and Schubert in the orchestra niches. In the Stadtsitzungsaal (Council Chamber), a 3200kg, flower-shaped chandelier dangles from a coffered ceiling encrusted with gold-leaf rosettes and frescoes depicting historic events such as the foundation of the university in 1365. Other tour highlights include the Stadtsenatssitzungssaal (Senate Chamber), lavishly decorated in green damask, the Wappensäle (Coat of Arms Halls) and tapestry-adorned Steinsäle (Stone Halls).