in Karlsplatz & Around Naschmarkt 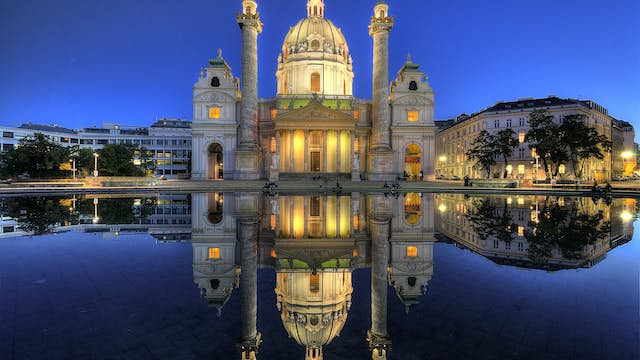 Built between 1716 and 1739, after a vow by Karl VI at the end of the 1713 plague, Vienna's finest baroque church rises at the southeast corner of Resselpark. It was designed and commenced by Johann Bernhard Fischer von Erlach and completed by his son Joseph. The huge elliptical copper dome reaches 72m; the highlight is the lift to the cupola (included in admission) for a close-up view of the intricate frescos by Johann Michael Rottmayr.

The enormous twin columns at the front are modelled on Trajan’s Column in Rome and show scenes from the life of St Charles Borromeo (who helped plague victims in Italy), to whom the church is dedicated. The admission price covers the Museo Borromeo chapel and a small museum with a handful of religious art and clothing purportedly from the saint. The high altar panel shows the ascension of St Charles Borromeo. In front of the church is a pond, adorned by a Henry Moore sculpture (Hill Arches; 1973) installed in 1978.