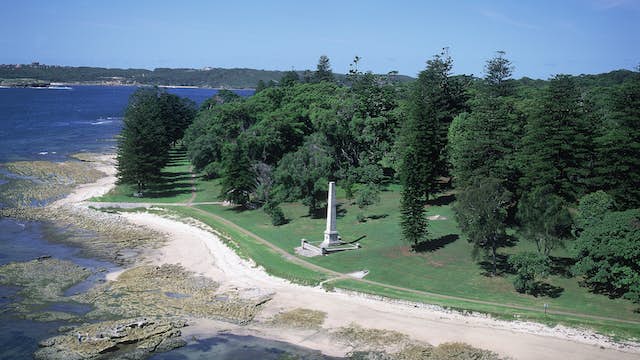 This national park straddles both heads of Botany Bay, 15km south of Sydney Harbour, enclosing 458 hectares of coastal bushland. Visitors come here to enjoy the walking tracks, picnic areas and sheltered beaches. The area played a key role in Australia's history; the first European settlers originally landed in this area in 1788, and today there are a number of interesting historical exhibits and monuments to explore.

Prior to European settlement, Captain Cook had landed here in 1770, naming the bay after the botanical specimens his naturalist Joseph Banks found here. Banks suggested it would be a good place to incarcerate a few crims, but when the First Fleet arrived in summer 18 years later, the scorched vegetation and limited water supplies were a far cry from Banks’ wintry paradise. The new arrivals quickly relocated to Sydney Harbour.

Cook’s monument-marked landing place is on the southern side of the park in Kurnell. The nearby visitor centre conveys the impact of European arrival on the local Aboriginal people, and has information on the surrounding wetlands and Cook’s life and expeditions.

Note that the car-entry fee only applies on this southern headland, and that pedestrian access is free. Most of the walking tracks begin close to the park entrance, so you might as well park outside. Tracks include the 1.1km Burrawang Walk, which lets you imagine what the park looked like in 1770 when the Endeavour, Cook's ship, arrived, and the spectacular 4km (each way) Cape Baily Coast Walk.

La Perouse is on Botany Bay’s northern headland, at the spot where the French explorer of the same name landed in 1788. He turned up just six days after the First Fleet arrived (much sooner than expected) and gave Mother England a decent scare. Anglo-Franco relations were apparently conducted without the usual disdain – La Pérouse and his men camped at Botany Bay for a few weeks before sailing off into the Pacific, never to be seen again. It wasn’t until 1826 that the wrecks of their ships were discovered on a reef near Vanikoro in the Solomon Islands.

There’s a monument at La Perouse, built in 1828 by French sailors, to commemorate the explorer. You can also visit the fabulous La Perouse Museum housed inside an old cable station (1882). The centre has relics from La Pérouse’s many expeditions, an interesting Aboriginal gallery and changing exhibitions on local history and environment. About 50m offshore at La Perouse is the strange Bare Island, a decaying, grass-tussocked concrete fort built in 1885 to discourage a feared Russian invasion. A 45-minute guided tour is the only way to access the island.

Nearby, Congwong Beach faces the bay and is good for families. Its neighbour, Little Congwong, is a more adult, clothing-optional scene.