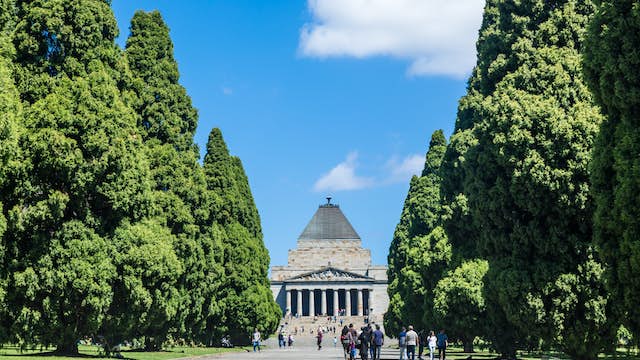 One of Melbourne's icons, the Shrine of Remembrance is a commanding memorial to Victorians who have served in war and peacekeeping, especially those killed in WWI.

The shrine draws thousands to its annual Anzac Day dawn service (on 25 April), while the Remembrance Day service at 11am on 11 November commemorates the signing of the 1918 Armistice, marking the formal end to WWI. At this precise moment a shaft of light shines through an opening in the ceiling, passing over the Stone of Remembrance and illuminating the word ‘love’; on all other days this effect is demonstrated using artificial lighting on the hour.

With its cenotaph and eternal flame (lit by Queen Elizabeth II in 1954), the forecourt was built as a memorial to those who died in WWII. There are several other memorials surrounding the shrine. Below the shrine, a stunningly conceived architectural space houses the Galleries of Remembrance, a museum dedicated to telling the story of Australians at war via its 800-plus historical artefacts and artworks.

Built between 1928 and 1934, much of it with Depression-relief, or ‘susso’ (sustenance) labour. Its stoic, classical design is partly based on the Mausoleum of Halicarnassus, one of the seven ancient wonders of the world.

The shrine's upper balcony affords epic panoramic views of Melbourne's skyline and all the way up tram-studded Swanston Street. This unobstructed view isn't coincidental; planning regulations continue to restrict any building that would encroach on the view of the shrine from Swanston Street as far back as Lonsdale Street.

Download the free Shrine of Remembrance app for a self-guided tour, or consider joining the guided tours daily (free for Australian and New Zealand veterans and defence force personnel).

Kids can choose from four activity cards and learn about the Shrine, armed with an 'explorer kit'. Borrowed from the visitor centre, it features a periscope, a magnifying glass, a kaleidoscope and more.

The complex is under 24-hour police guard; during opening hours the police are required to wear uniforms resembling those worn by WWI light-horsemen.