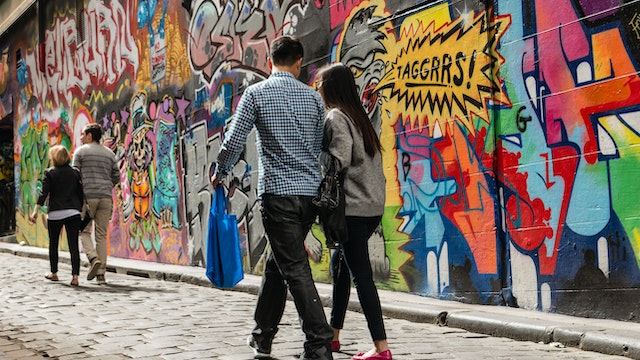 The street art continues along Rutledge Lane, which horseshoes back around to Hosier Lane. As the artworks evolve, with fresh murals continually thrown up overnight (officially most of this is actually illegal), no two visits will be the same.

You'll visit Hosier Lane, as well as many other street art-laden lanes nearby including AC/DC Lane, on walking tours of the city centre.

Many famous Australian and international artists’ works have been spotted in Hosier Lane since it was first made famous in the global street art scene in the 1990s. The most well-known a Banksy stencil piece, Parachuting Rat from 2003, was mistakenly painted over by city council workers in 2010.

Other renowned artists to have graced the lane with their ephemeral works include ABOVE (USA), Shepard Fairey (USA), Invader (France), and D*FACE (GB), as well as local talents such as Ha Ha, Prism and Rone.

Melbourne's street artists first took their lead from the graffiti scene in New York, with train carriages and railway tracks the focus in the 1980s, before Melbourne's dark and disused city laneways became the new canvas for creatives. Over time stencil art, ‘pasties’ and sculptures complemented tags and pieces spray-painted after hours.

Small bars and restaurants began popping up off the main city thoroughfares. Soon the city embraced this new vibrancy and the attention from overseas visitors to Melbourne. Many private and public walls now have large-scale murals painted on commission across Melbourne. Hosier Lane is just the beginning of your street art odyssey. To learn more about Melbourne’s early underground street art scene, seek out the 2005 documentary RASH.

In 2020, ten masked men spray painted Hosier Lane with fire extinguishers filled with brightly colored paint, an act of vandalism according to the police and Lord Mayor. It was unclear if this was a response to the commercialization of Hosier Lane’s street art, or just a boring contribution to its story, but the bluestone cobbled lane was quickly cleaned up and new artworks appeared almost immediately.

Another major landmark to look out for is the 1920s-built Forum theatre, originally a picture palace and now a major live music venue.