Where to find peace and quiet in New York City

Even if you’re not local, it will get to you: the car honks, the clank of trains passing overhead on elevated lines, or the roar of traffic below the pedestrian walkway on the Brooklyn Bridge. Even those walking conference calls, with dressed-up walkers barking into invisible hands-free mics around Wall Street.

When enough’s enough, don’t panic. There are plenty of ways to find peace and quiet without leaving the city. Here are a few of our favorites.

Just above the loudest point in the city – the Bryant Park subway station, which hits 93 decibels, greater than nearby Times Square’s mark of 76 – you can find the New York Public Library, one of the city’s most beloved spots of peace, quiet and beauty. This 101-year-old library is famed for its upstairs reading room, the size of two city blocks. Get a spot on the long wood tables with bronze lamps, read a bit, then look  at the skyscrapers through the windows below to see the reflection of what looks like ceiling murals of cloud-filled skies. 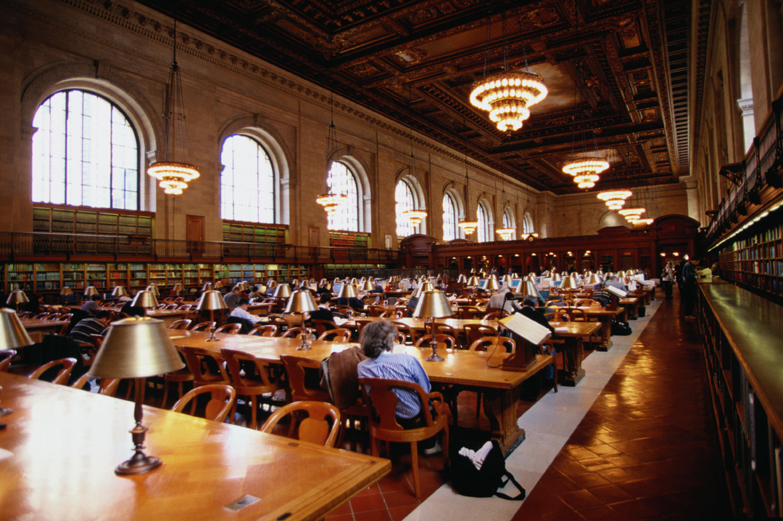 It’s wonderful, but it can be busy. A better, even quieter alternative is the more modest, nearly as majestic DeWitt Wallace Periodical Room, a left turn from the first-floor main entrance (bypassing the steep granite stairs ).

So much of Central Park takes in a bit of a hum from surrounding traffic – the best way to escape it altogether is in its woodland heart at the 38-acre Ramble, between 73rd and 78th Streets in the park. It’s fun to, uh, ramble around the Ramble, as it’s set up purposely like a 'wild garden' with little walkways that are easy to get lost in. Once you do, don’t panic: getting lost there only means you found what you were looking for. 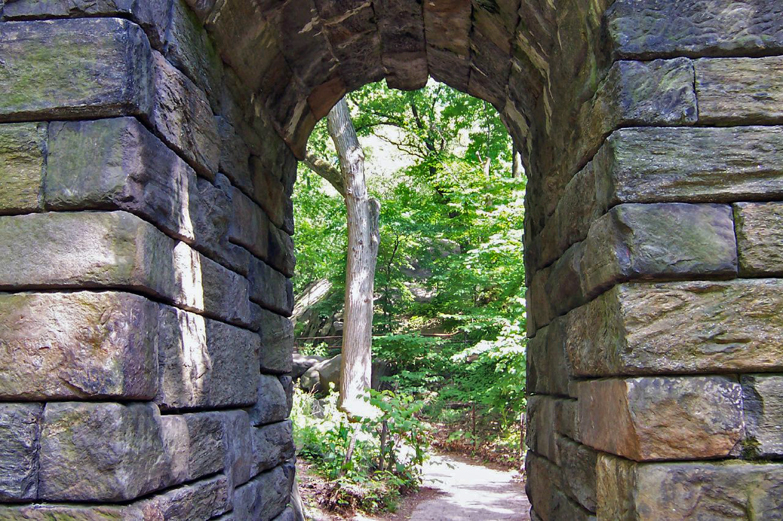 The narrator of On the Road sits on an ‘old broken-down pier’ on the Hudson, ‘watching the long, long skies over New Jersey and sense all that raw land that rolls in one unbelievable huge bulge over to the West Coast.’ The setting has changed since Kerouac’s days, for the better, but if you walk past his old apartment at 454 W 20th St to the waterfront, across the loud 11th Ave, and up a couple blocks to the renovated piers at Chelsea Waterside Park, you can sit and take in the same scene. And forgive any passing tug boat for breaking the silence.

With a bike, the Hudson River Greenway is one of the great ways to be reminded New York is, down deep, a river town. The most relaxed spots are hard to reach otherwise. Under the George Washington Bridge (around 18oth St), sits the famed Little Red Lighthouse. The subject of a classic children’s book, it was moved here from Sandy Hook, New Jersey in 1921. There, and just south, are grassy parks and river access where locals sit and fish, and you can forget the city you’re in. 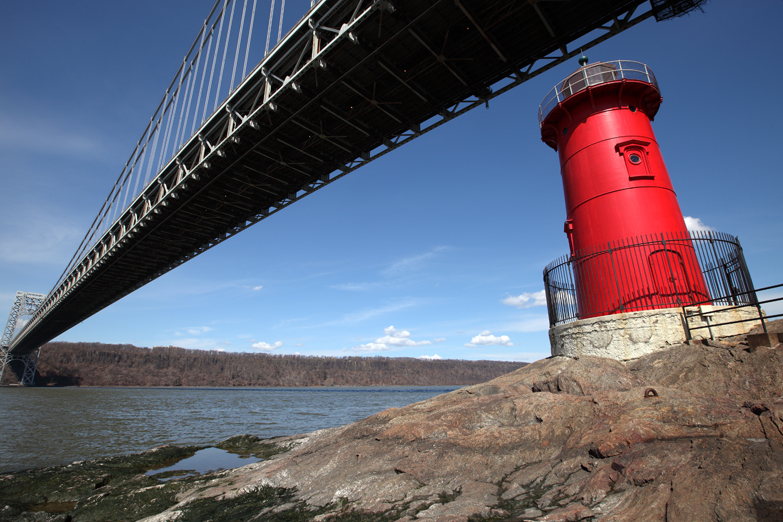 The New York Times called the quarter-mile Newtown Creek Nature Walk ‘ironic,’ with reason. Marking the border between Queens and Brooklyn, this newish ‘nature park’ is set along an oil- and sewage-slicked creek lined with fuel tanks. Give it a shot. No, really.

You enter along a bold, 170-foot entry walkway, with bending concrete walls dotted with portholes. Look back at the turn, as it frames the Empire State Building neatly. Along the water, concrete steps lead below the surface (as if!), along with stark sculptures and plotted plants of what used to live in the area. You’ll often be alone here, and it’s far more relaxing than it might sound.

At either end of the overlooked, bizarre Roosevelt Island you can find moments of quiet bliss overlooking the tidal current of the East River. Once a home for an insane asylum, Roosevelt is best reached by the fun cable car via a MetroCard. From there, you can walk south to the in-progress Southpoint Park, built around the atmospheric ruins of an old smallpox hospital. More quiet, and a relaxing 20-minute riverside walk north, is the North Point Lighthouse, at the end of a wide park. 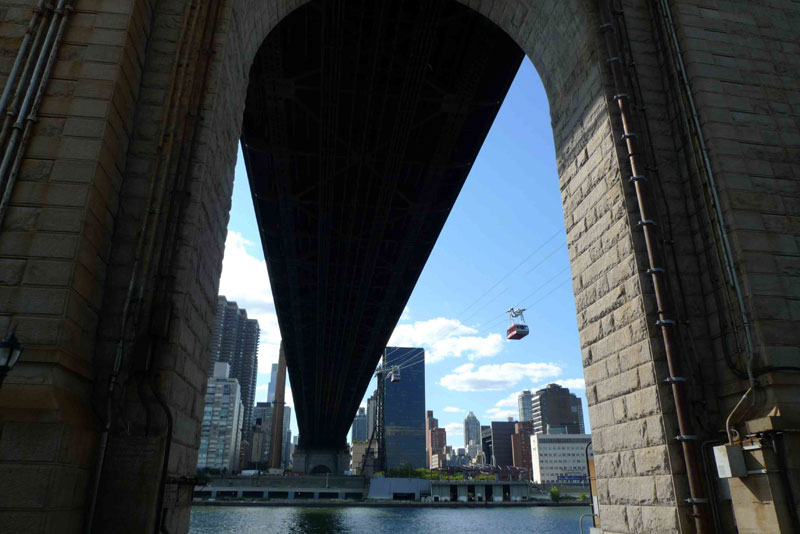 On Roosevelt Island below the Queensboro Bridge. Photo by Robert Reid / Lonely Planet.

Any city beach (outside summer weekends) can be a breather from city noise, but the king of out-there is out at Queens’ Jamaica Bay. Home to over 300 bird species, it is one of the best bird watching spots on the east coast.

Once you’re out on the bay in a canoe or kayak - Sebago Canoe Club (www.sebagocanoeclub.org/) offers free paddles - birdsong takes over from the JFK jets. Afterwards, nearby Rockaway Beach has plenty of quiet patches too, including some bay-facing restaurants with good food. Try the fish sandwiches at Bungalow Bar (www.bungalowbarny.com). 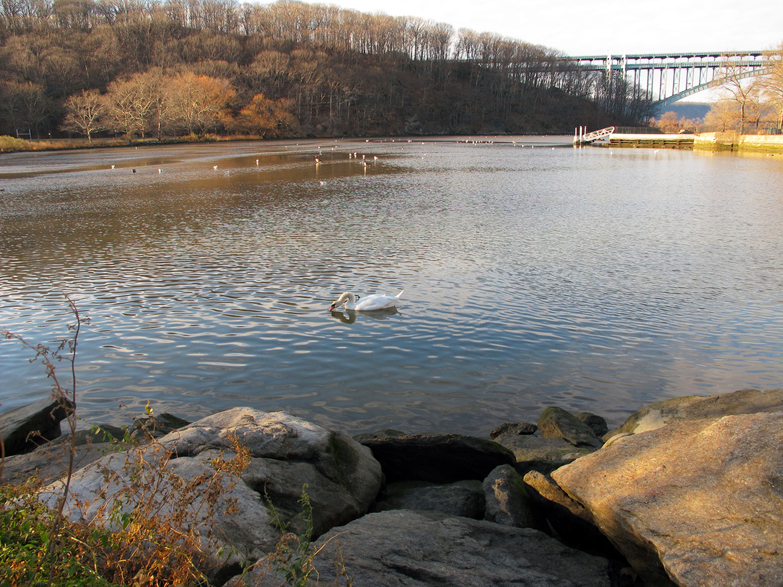 The underrated, hilly north tip of Manhattan Island in Inwood Hill Park is home to the island's only remaining native forest, occupying a 200-acre green patch of oaks, dogwood, hickory and tulip trees where the Harlem River meets the Hudson.

Some say this is where Peter Minuit bought the island for a couple dozen dollars' worth of trinkets in 1626 (now marked by a plaque on the Shorakkopoch Rock). Past the handful of dog walkers and a baseball diamond, it gets wilder in the woods. Look for glacial potholes in rocks or the ruins of the School and Home for Wayward Girls, long left to the elements. Wait, this is New York City?

Robert Reid has written over two-dozen Lonely Planet guidebooks, trained to be a mountie, flew on Iron Maiden's plane and enjoys a good New York City sandwich in a quiet spot. Find Robert's latest on Reid on Travel and on Twitter at @reidontravel.