The Slovenia Green Capitals Route, which launched in October 2020, takes independent travelers to three travel hubs in the sustainability-minded nation of Slovenia.

The so-called “capitals” – reached by bike, car or train – include Ljubljana, the country’s urban center; Kočevje, its natural heart and the Bela Krajina region, a cultural melting pot of customs and gastronomy. Here's why you should plan a visit.

Mornings are frenetic in Ljubljana’s center. This autumn day was no exception. Shoppers and vendors haggled in the open-air green market over tomatoes, peppers, apples, blocks of cheese and jars of honey. Locals and tourists ducked in and out of the St. Nicholas Cathedral, which sits on 700-year-old foundations. Behind the church, a line formed for the funicular up to the Ljubljana Castle. Along the Ljubljanica River, which bisects this Central European metropolis, animated conversations filled café terraces.

I finished my own coffee next to the market and walked my bicycle, equipped with packs containing clothes and gear, to the city’s famous Dragon Bridge about 100m away. I was meeting my cycling companion for the next three days, Jan Klavora, for a premier ride along the as-yet-untested Slovenia Green Capitals route. Our adventure, which Klavora helped design with support from the Slovenian Tourist Board, would start and end in Ljubljana, Slovenia’s capital. From there, the journey would head south, about 40 miles (65km), to Kočevje, the “capital” of nature, where Unesco forests and wildlife become the stars. We would then turn east for approximately 50 miles (80km) to the Bela Krajina region, the country’s culture “capital,” to experience diverse traditions producing some of the area’s best food and wine.

“This route only visits locales that have earned ‘green’ status through the country’s certification process,” Klavora told me over the phone the week prior. Klavora is a founding member at Good Place, an NGO that certifies destinations (cities, towns, villages and businesses) through the demanding Green Scheme, which requires candidates to meet best-practices benchmarks in categories such as waste management and nature protection. He explained Slovenia Green Capitals (SGC) gives independent travelers the tools – map, information about green restaurants, accommodations and activities – to see the world’s first certified green nation in a responsible way.

“The fall weather is cool and clear,” Klavora continued over the phone. “If you’re up for it, we’ll cycle the stages and do a test run of the route. Like all travelers, we’ll decide our own itinerary. SGC roads and trails are all quiet, and easy-to-moderate in difficulty… but hilly. If we get tired, we’ll take a train back.”

Ljubljana’s architecture, a swirl of art nouveau and baroque, faded to the countryside soon after we left the city’s Dragon Bridge, which symbolizes the winged beast Jason (of Argonauts fame) supposedly killed while passing through the area. Our first stage – known as the Dragon to Bear route – of the SGC itinerary would take us from the country’s cosmopolitan magnet to the town of Kočevje, and its surrounding Kočevsko region, Slovenia’s nature vortex. It would also take us across two Unesco sites.

Cycling south, with the Alps behind us in the crisp autumnal air, we first passed the marshy, Unesco-inscribed remains of “prehistoric pile dwelling” settlements dating back millennia. A couple of hours later, we entered the dense-forest majesty that is the Kočevsko region’s hallmark. More than 90% of the area is covered in trees – and none more celebrated than the Krokar virgin forest, 75 hectares of primal beech trees and a Unesco Heritage site.

After hitching our bikes at the cycle- and hiker-friendly Bearlog Hostel, our night’s lodging, we met Miha Ogorelec, who would guide us into the woods. Our first stop: a search for wildlife prints. “You see this,” Ogorelec squatted and pointed to an outline of a bear paw in mud. “And this,” he pointed to what looked like a child’s boot. “People and animals live together here.” Following the tracking expedition (which also included wolf, fox and red deer prints), we climbed steps to a hide, or stand, built to safely observe bears. We sat in silence, above the forest’s floor, listening to its pre-dusk activity.

“This is one of the few places in Europe where all three large carnivores – bears, lynx and wolves – still live in the wild,” says Nevenka Klun, head of Kočevsko’s tourism department. “Coexistence is among the most important parts of our heritage. We want to exist in a healthy way with wildlife to preserve our forests and live in harmony.”

6 incredible places to swim in Slovenia: From beaches and sand bars to Lake Bled

The next day, we cycled down to the Kolpa River, which forms the border with Croatia, and hung a left and east into Bela Krajina. (Bela Krajina, or white frontier, is so-named for the white-trunked birch trees.) We rolled over undulating, green hills and along the waterway’s contours. It was easy to understand why cultures from across central and southeastern Europe settled on this idyllic expanse of farmland, where countries and topographies merge.

We rode through the Krajinski Park Kolpa, which follows the river’s course. Within the nature park, dozens of ancient villages, mills, castles and churches provided backdrop as families lounged on the shore, waded in the river and set up picnics. We stopped at Šokčev dvor, a traditional home-turned-museum in the village of Žuniči. The park’s director, Boris Grabrijan, wore a traditional sheepskin shawl and greeted us with a bottle of local rakija (schnapps). As we stood in the open courtyard among yesteryear tools used to make flax and hemp cloth, workers above us re-thatched the building’s roof.

“Slavs came from the east,” Grabrijan told us and pointed. “Germanic people, from the north. And from the west, the Latin culture. This is the crossroads of three cultures.”

The next 24 hours were a whirlwind glimpse into Bela Krajina’s breadth of diversity. First, we had a dinner of grilled lamb and roasted vegetables at Gostilna Kapušin, ranked as one of Slovenia’s top 100 restaurants. Then, as the moon replaced the sun, we headed to the Šturm Vineyard, clinging to hillsides outside the historic town of Metlika. Grape pickers were coming in from the fall harvest. We stood in the cellar with patriarch Otmar Šturm and congratulated each other for our good timing while sampling several of the winery’s more than 20 red, white and sparkling varieties.

Get to know Chef Ana Roš in 22 questions

The next morning we woke early and headed to a farm for breakfast and coffee before walking into dew-covered grass to feed and play with sheep through a program created by tourism operator Bravina to show locals and visitors alike how important the woolly animals are to the area’s history. Before leaving the fertile Bela Krajina region, we headed to another farm, this one raising chillis. Marko Vidic, the owner of Chilli Rosa, has been growing heat for five years. He showed us around his fields and dared us to test the peppers that produce eight sauces ranging from “kinda hot” to “nuclear.”

“This region is special because it combines everything,” said Vidic. “Culture, nature, great food, really friendly people … and, by Slovenian standards, we are remote.”

Getting around Slovenia by bicycle, bus, car or train

That remoteness accentuated Ljubljana’s cosmopolitan vibe when we returned on the third day. Passing the Dragon bridge on the way to take a Moustache Tour – which traces three of the city’s most important residents – smart and trendy cafes, shops and restaurants painted the scene. At Jakob Franc, in the Trnovo neighborhood, we sat on the riverside terrace and ate steak with truffles and free-range sausage served with horseradish from a menu focused on local ingredients. We lifted glasses of red wine.

“The Slovenia Green Capitals stages show our diversity while showing-off Slovenia generally,” Klavora said after we toasted a successful excursion. “The hope is travelers will experience this country with confidence that destinations themselves are making responsible decisions.”

The 8 best places to discover in Slovenia

Why Slovenia Is The BEST Vacation Spot You've Never Heard Of

You might also like:
Everything you need to know before you come to Slovenia
Slovenia's best hikes boast incredible Alpine vistas without the crowds
Seeing Slovenia on a budget

This article was first published November 2020 and updated May 2022 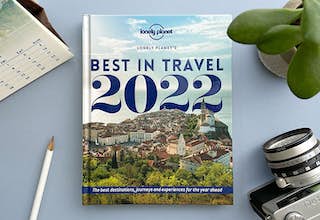 Lonely Planet's Best in Travel 2022 ranks the world’s must-visit countries, cities and regions to provide a year's worth of travel inspiration.