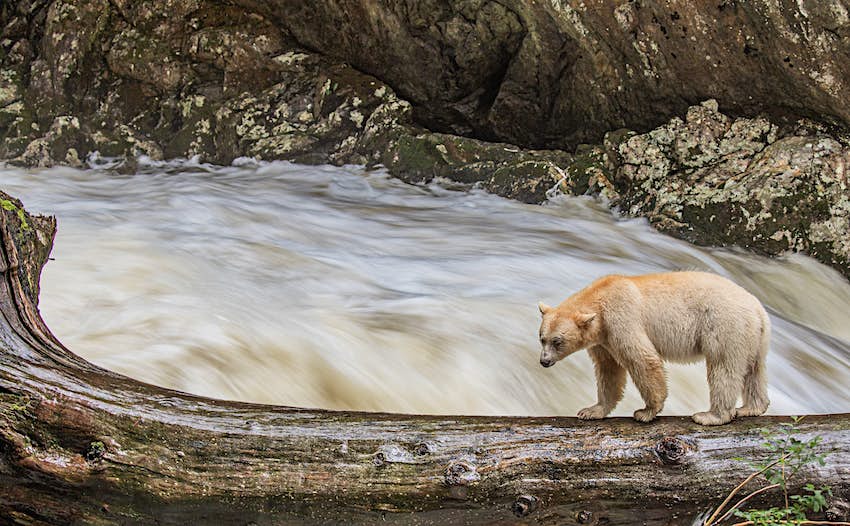 The white 'spirit bears' (also known as kermodes) of British Columbia, Canada are known for their unique beauty and rareness, especially amongst First Nations communities. They are a long celebrated icon of the area, being added as the official mammal of the province back in 2006. Now, a new study has suggested that the animals are under threat due to environmental and ecological disruption, with groups in Canada calling for measures to be put in place to protect the beloved creatures.

“The spirit bear is one of the rarest bears on the planet, only found in Northwest British Columbia's Great Bear Rainforest. The Spirit Bear is basically a white black bear and is considered very sacred to First Nations communities in the region. In order to produce the spirit bear, both parents have to have the recessive gene. Spirit bears have been genetically isolated to the outer islands which has allowed them to survive,” Douglas Neasloss, Resource Stewardship Director of Kitasoo/ Xai'xais First Nations told Lonely Planet.

Indigenous-led research was published recently in the British Ecological Society’s Ecological Solutions and Evidence, with the study results revealing that the bears are actually more vulnerable and rare than previously thought. The study analyzed DNA collected from hair samples from 385 black bears across 18,000km in coastal British Columbia’s Great Bear Rainforest.

“First, we found that the frequency of the white version of the gene was as much as 50% lower than previous estimates. While ongoing work will estimate the number of spirit bears in the area, such a finding hints that spirit bears are rarer than previously believed. Our work also revealed that existing parks and protected areas do not encompass the habitat where approximately 50% of the Spirit Bear ‘hotspots’ occur, regions where the spirit bear version of the gene is especially prominent,” Dr. Christina Service, Wildlife Biologist for the Kitasoo/Xai’xais Stewardship Authority and Researcher with Spirit Bear Research Foundation, Raincoast and UVic told Lonely Planet.

For Douglas Neasloss, the results are incredibly important, pointing to the work that has to be done. “Given my community’s cultural and economic connection to spirit bears, it is not an exaggeration to say that our well-being is directly related to the well-being of these bears. It is critical we find avenues to attend to these gaps in protection. While the bears are celebrated, they are under continuous threats from forestry, a decline in salmon numbers, global warming and the hunting of black bears that carry the recessive gene. I would say that we do need to do a lot more to protect these islands and bears. Hopefully, this new research will get things moving.”

Dr. Service added that the apparent gaps in the habitat protection would benefit greatly from additional measures being taken to safeguard the future of the spirit bear.

8 min read • Published about 12 hours ago