The Greek islands may still be the dream destination for holiday-makers looking for splendid isolation – but one small Scottish island has just topped them all.

The Isle of Arran in the Firth of Clyde, has been voted as having the best hotels amongst all European islands in an annual survey carried out by the hotel search website Trivago. Greek islands including Santorini, Kefallonia, Ios, Patmos and Mykonos claimed 15 of the top 20 places in the survey. But it was Arran, which measures just 30 miles (48 km) long by 10 miles (16 km) wide which won the top spot, as visitors praised its hotels and hospitality.

The survey ranked islands in Europe with at least 30 hotels and took an average of visitor ratings from over 34 websites and 220 million reviews. The British islands of Jersey and Guernsey also made it into the top 20, at 11 and 15 respectively. But it is the most popular Greek islands which still dominate the list. The best-rated hotels are on Astypalaia Island (ranked second), Sifnos (third) and Ios Island (fourth).

Arran has a population of just under 4,650 and barely qualified for the thirty hotels requirement. But visitors across 34 websites praised the island’s hotels for their homely atmosphere, great food and fantastic surroundings. “It is great to see the Isle of Arran soar to the top of our annual Island Ranking, which previously only included Mediterranean destinations,” said Denise Bartlett of Trivago, the website which carried out the survey. “Perhaps this list might inspire those looking for a last-minute summer holiday to look a little closer to home this year.”

Arran specialises in small, family-run and historic hotels, such as The Lagg Hotel, an 18thCentury Coach-House close by Kilmory and The Douglas, a former manor house which offers local cuisine and views over Brodrick Bay. These were two of the best reviewed hotels on the island, which was also praised for offering visitors value for money when it comes to accomodation. 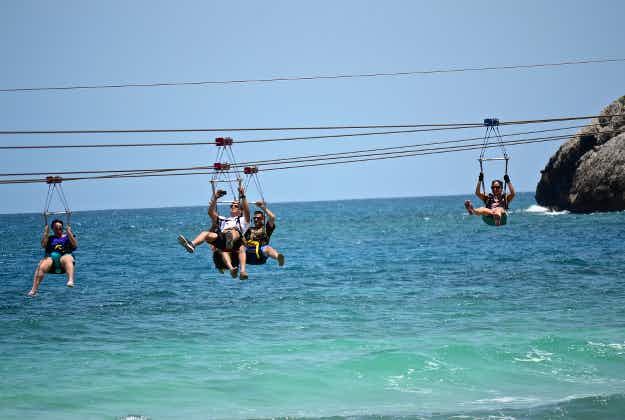 Looking for fast thrills? Europe gets first zip line over…

See incredible drone footage of the Philippines as its never…