Land and sea: a gourmet tour of Sardinia

The coastline and mountains of Sardinia have created two unique food cultures in this island region of Italy. Embark on a culinary journey with Matthew Fort of Lonely Planet Traveller magazine to discover more. Images by Anders Schønnemann. 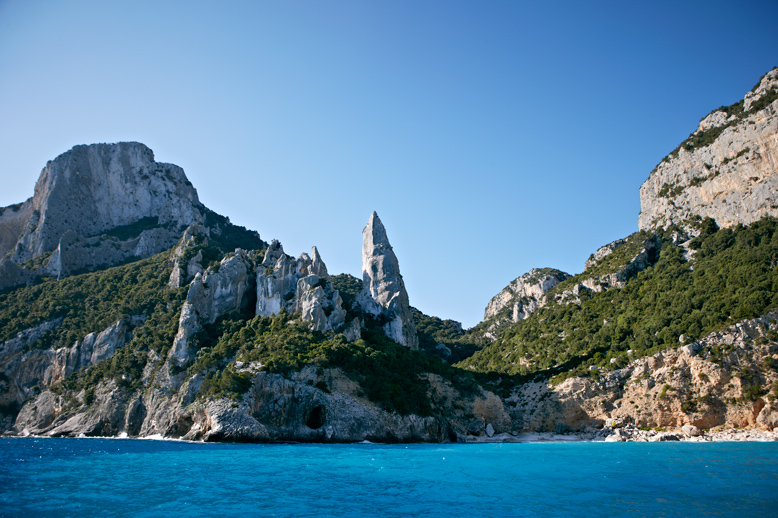 Sardinia’s food culture is shaped by its sea and mountains – both meet here at Cala Goloritzè on the island’s east coast. Image by Anders Schønnemann.

Sardinia’s extraordinary culinary culture is strictly divided into food from the sea and food from the land. On the coast you eat fish; inland you eat meat. There is very little crossover. Fish stews beside the sea, roasted meats in the mountains – the qualities of the dishes are rooted in region, terrain and tradition, and the Sardinians are proud of those distinctions. To explore Sardinia’s physical landscape is to explore its culinary landscape at one and the same time. 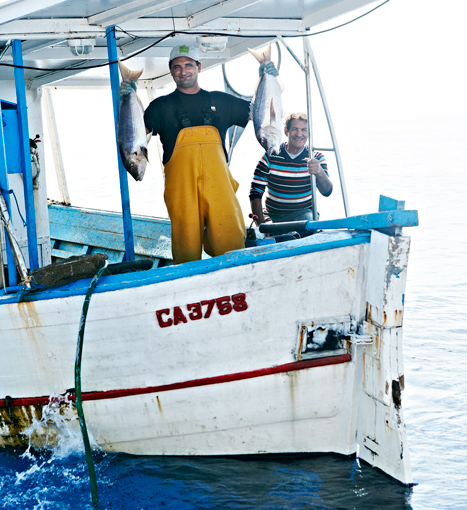 Silverio Sandolo holds aloft a pair of dentex – a fish found mainly in the Mediterranean. Images by Anders Schønnemann.

The port of Villasimius is cloaked in darkness. Some 20 miles east of the capital Cagliari, at the southern end of the island, Villasimius was once another of those small fishing villages that speckle the coast of Sardinia, but its position and sheltered anchorage lured the yachts of the rich and the cars of the holidaymakers, and now it’s a flourishing centre of tourism.

Silverio Sandolo backs the Sparviero out into clear water and sends the boat nosing past the sleeping mega-cruisers, trim yachts and other fishing boats not making the dawn run. Silverio is one of 10 or so fishermen still working out of Villasimius, selling their catch either in the fish market at Cagliari, or to restaurants in the town and others along the coast. Between them they keep alive a tradition that goes back centuries, a tradition celebrated on the plate in the form of stuffed mussels, marinated anchovies, octopus salad, deep-fried sea anemones, prawns with cannellini beans, and linguine with spiny lobster. 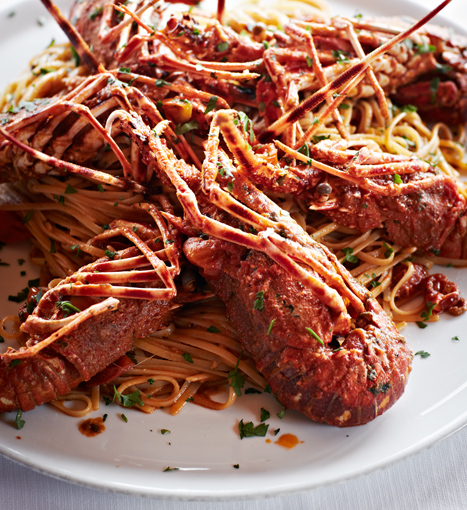 Later, I’ll find samples of the day’s catch at the market in Cagliari. The marble slabs fronting each stall shimmer with glittery, glimmery, spangled fish – sardines, sea bass, cod, grey mullet, red mullet, scarlet and gold as a brocaded waistcoat. There’s a tray full of languorously squirming eels, as thin as bootlaces, and mounds of cardinal-red prawns. An octopus gloopily clambers over the bodies of some of its kind. These are the materials used to form dishes such as the warm salad of prawn tails, fish stew or pasta with sea urchin roe served in the restaurants of Villasimius.

Until quite recently, there were 30 or 40 pastori and their herds on the peaks of the Supramonte mountains; today, there are just three or four. Lino Fronteddu carries on the family tradition from his retired shepherd father Antonio, with about three hundred goats and thirty or so pigs. The pigs are smallish, curious mottled animals, which range freely over the mountain. Lino comes up each morning between 6am and 6:30am, checks on his goats, feeding and milking them, before returning home at about 8pm or 9pm. But if the pattern for managing the goats hasn’t changed, other parts of the shepherd’s life have. ‘These days,’ Antonio says, ‘the pastori come up in their four-wheel drives.’

Lunch is porceddu (suckling pig), the offspring of one of the families we’ve seen during the day, split down the middle and cooked in a metal frame leant against the stones and turned from time to time. But before that comes moddizzosu – potato bread not unlike pitta bread, but lighter and fluffier, suggesting a small, warm bread duvet. It sits very happily with slices of dark, purple, dense salami; cured belly – pink reefs of meat in wide seas of white fat; and guanciale, cured pig’s cheek. They’ve been thick cut, and the fat has a dense, silky delicacy. There are homegrown tomatoes of penetrating freshness and good wine from a jug, the kind of everyday food and drink enjoyed by Sardinians of the mountains. ‘Cooking is the culture of the people,’ says Antonio. 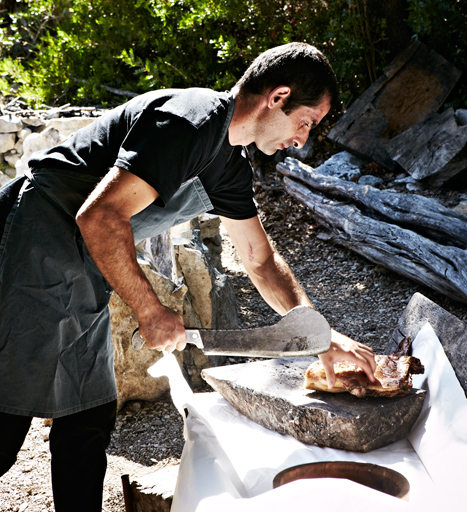 Now it’s time for the porceddu. Lino unclips the metal frame that’s been holding it, and flips it into a huge wooden trough lined with paper. He takes a massive cleaver and hacks the tiny carcass into small chunks with casual force, and tosses them into a wooden bowl. The skin of the suckling pig is thin, as crisp as the layer of caramel on top of a crème brûlée. The meat is sweet and delicate, and the abundant fat carries hints of the herbs and roots foraged on the hillsides around. We eat neat, narrow triangles of four-month-old clarissa cheese, made by hand by Lino. It is firm, close-textured, with a lovely fresh lactic tang to it. And casu marzu, the pungent cheese famous for visibly containing tiny maggots. It’s squidgy and spreadable. There don’t seem to be any maggots today, but the cheese is deliciously meaty and potent.

The life of a shepherd is hard and solitary, and the financial rewards are slim. ‘No holidays, little money,’ as Lino sums up his life choice. But he wouldn’t change it. ‘I have freedom,’ he says simply. ‘I’m very independent, like the goats.’ As with Silverio and his fishing boat, I wonder whether his children will want to share the same life. It would be sad to think that one day the pastori might fade like the carillon of their goats’ bells upon the bright air of the Supramonte mountains. But some traditions will not die out. Not up here on the high pastures. Not yet. 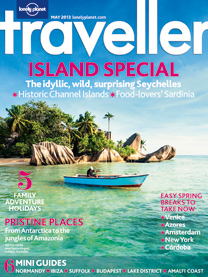