India is seeing an ever-increasing number of visitors who come to experience the unique blend of headiness that the subcontinent so effortlessly brews. The route between Delhi, Agra and Jaipur has, for many years, been a veritable 'India 101' - an introduction to those on tighter travel schedules. Although the trail is undeniably well trodden, there’s still plenty to discover for DIYers, or for those with an afternoon away from their tour group. We’ve collected a few oft-missed attractions that are well worth seeking out during your visits to Agra and Jaipur.

From Delhi, head southeast via private vehicle (about four hours) or by train (figure roughly two hours) to Agra, home of the wondrous Taj Mahal - a resounding tribute to a lost love and undoubtedly the most brilliant manifestation of the Mughal dynasty’s design aesthetic. The glistening white marble and the swirling, minaret-like towers never fail to impress.

While the Taj Mahal was built to honour the dead, Fatehpur Sikri, located 40km from Agra, was very much a place for the living. The palace’s grand human scale is immediately captivating - it’s impossible not to feel haunted by the ghosts of the emperor, princesses, valets and concubines that once roamed the hallowed courtyards.

When you’ve maxed out your memory stick with snaps of forts and palaces, head to Kaya Kalp, a 99,000 sq ft spa located at the ITC Mughal (www.itchotels.in/hotels/itcmughal.aspx), which takes guests on a sensorial journey back to an era of excess and great conquest. It is well documented that the members of the Mughal elite enjoyed the trappings of a luxurious lifestyle, with ample gardens, feasts, harems, sweeping palaces and many other ostentatious manifestations of wealth. At the ITC Mughal you’ll find a sumptuous reproduction of that bygone era - in fact, the hotel has remained so precise and true to the Mughal dynasty that it was the recipient of the Aga Khan Award for architecture in 1980.

After pushing through the massive wooden doors, the spa’s cardinal design element becomes immediately apparent: a ruby red pomegranate. It is commonly believed that Barbur - the first Mughal emperor - came to Rajasthan from Ferghana (in present-day Afghanistan), a lush kingdom with plenty of fruit-bearing trees. When Barbur decided to stay, he instructed his architects to recreate his elaborate gardens and plant a variety of orchards, including the pomegranate - his undeniable favourite. Further evidence of the pomegranate’s importance has been documented on many stone carvings within Agra Fort. The coveted pomegranate also features in the spa’s signature treatment, an exfoliating scrub made from pomegranate peel, orange rind, pomegranate seeds and brown sugar.

Jaipur: hidden temples in the City of Forts

From Agra and Fatehpur Sikri, plough westward to Jaipur (about three hours by private vehicle), where further spoils of the Mughal lords await. Known as the Pink City for its ribbon of walls that extend throughout the central core (the city doesn’t actually look particularly pink), Jaipur is the gateway to Rajasthan’s cache of rugged landscapes, photogenic cities and elaborate palaces.

Most visitors make a beeline for Jaipur’s surrounding hills dotted with parched trees - a hint that a great desert (the Thar desert) sits not too far beyond. Here lies one of the city’s great attractions, the Amber Fort (pronounced ‘amir’); yet another great legacy of a long-lost empire. While most tourists mount the ramparts on a regal-robed elephant, try driving around to the back of the fortress and start your journey within the simple hamlet of Amber dating back to the 11th century. Here you’ll find the Shri Jagatshironmani Temple, built at the request of Queen Shringar Devi Kanakaway (wife of Man Singh, ruler of Amber) between 1599 and 1608. The temple is particularly rare because Krishna is not depicted with his usual consort Radha, he is instead accompanied by 'Mira Bai', a princess who became a mystic, and later Krishna’s lover. The temple’s name translates to 'the head jewel of the idol of Lord Vishnu'. During your visit you may spot the groundskeeper watering the plants and gently sweeping the stairs - his family has been caring for the temple for over 20 generations.

A second, and equally fascinating temple sits just a short walk from the popular City Palace Museum within the city centre. Shri Govind Dev Ji Temple, also a place for worship for the Lord Krishna (sometimes called Govind Dev), houses an image of the deity that is believed to be over 5000 years old. The temple is particularly unusual because it is only open for seven 'jhankis', or glimpses, per day (check out www.govinddevji.net for a list of times). During each viewing, devotees gather in front of the gates to sing preparatory hymns, and when they enter the complex they pray before statues that are fastidiously decorated in different clothing for each deliberate viewing throughout the day - the costume materials also change throughout the seasons.

From Jaipur, figure about four and half hours to drive back to Delhi by private vehicle; domestic flights are also available on Air India (airindia.com). 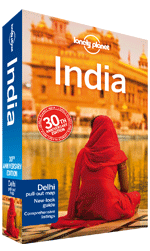