You notice the warning signs - red eyes, irritability, heart-pounding wakefulness in the dead of night. It strikes without warning, transforming travellers into dead-eyed, shuffling automata. Once you glimpse your gaunt reflection in the hotel mirror, the transformation is complete.

Have you joined the ranks of the wandering undead? No, it’s worse - you’re jet lagged. 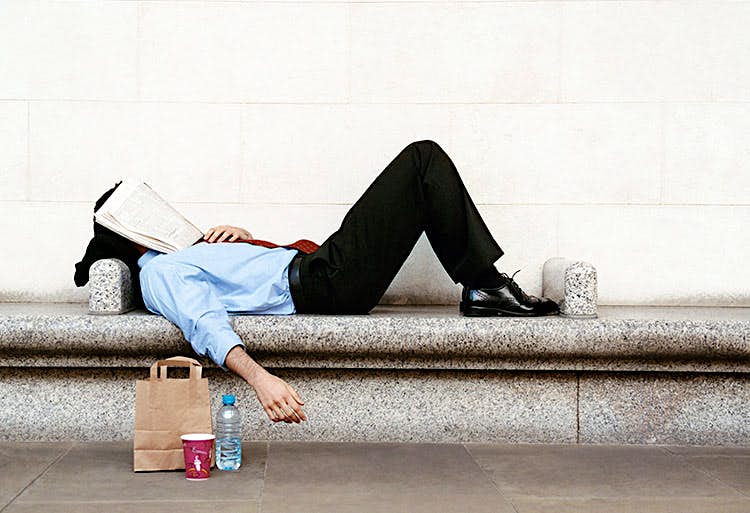 Complaining about jet lag isn’t just a way to humble-brag your adventures (though that eases the pain). It has a miserable roll-call of symptoms - exhaustion, nausea, insomnia, visual disturbances, stress - not to mention post-travel regret, as you pay the price for that ‘cheap’ red-eye home. Scientists claim they’re on the verge of a jet lag breakthrough but until the magic pill arrives, there are ways to minimise your time as a zombie.

Why does jet lag happen?

Let’s get one thing straight: jet lag is not simply tiredness and dehydration after a journey. You can recover from this fairly easily by (you guessed it) sleeping and drinking water. Jet lag happens when you cross multiple time zones, usually on a long-haul flight, and feel the effects on your levels of alertness, appetite and sleep patterns.

So why are you being punished for your fabulous jet-setting life? Blame your circadian rhythm, the ‘internal clock’ governing your daily eating and sleeping patterns. Or don’t - your suprachiasmatic nucleus, a group of brain cells that coordinates a lot of your bodily functions, does a fine job of keeping you alive. So good that it marches on, undeterred, when you enter a new time zone.

This means that your body initially continues running on the same rhythm it followed in your departure destination. Adjusting to a new set of waking, sleeping and eating times can take a few days. Cue midnight hunger, 4am wakefulness and falling asleep in your lunch.

The most skilled jet lag dodgers plan their movements a few days ahead of their big trip. Start with the timing of your flight: long-haul flights that land in the evening allow a greater chance of minimising jet lag symptoms because you’re more likely to drift asleep naturally when you arrive, giving you a head start on the new routine. (The downside is that flying during the day can feel like a waste of vacation time.) 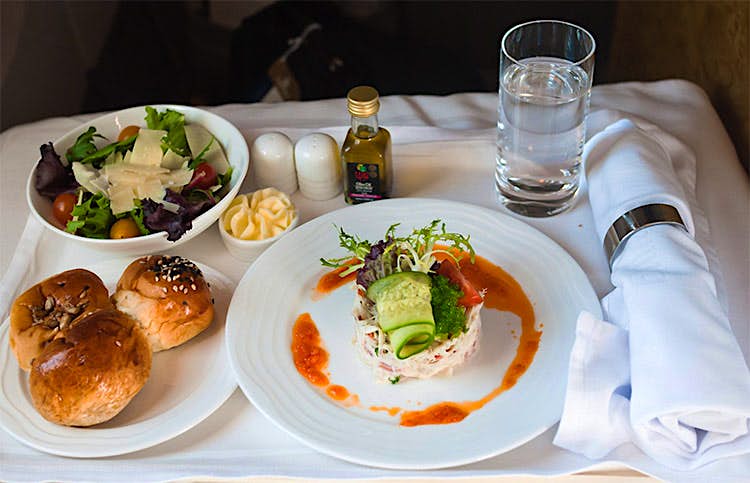 What do you mean, your in-flight meal doesn't look like this? Nibble lightly on the flight and avoid the demon drink. Image by Kenneth Lu / CC BY 2.0

On the day of your flight, fuel your body in the right way by having light meals and going easy on the caffeine. The most well-known (and wilfully ignored) tip is still the best: avoid alcohol just before, during the flight, and soon after you land. Dehydration, alcohol’s ugly stepsister, has a huge impact on the severity of your jet lag symptoms.

And when you land, build extra comfort into the first few days of your trip. If you’re a hosteller, spend your first night in a private room if you can. When you’re exhausted and running on a different time zone, the last thing you need is an endless soundtrack of people rummaging through their luggage (or dancing the hostel hustle in the bunk above yours). Don’t plan on intensive sightseeing in your first 24 hours - and don’t make your arrival day your one-and-only chance to see the Vatican, Statue of Liberty or anything else crucial (or involving big queues). And if you’re travelling for business, plan to arrive a day or two early to adjust. 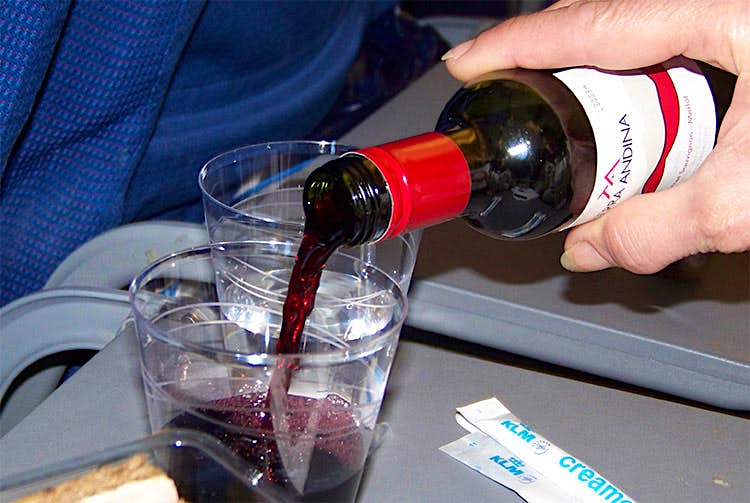 No, this doesn't count as replenishing your fluids. Image by matthewreid / CC BY 2.0

Ok, so your intentions to adjust your sleep schedule vanished and you partook of every free Chardonnay on the flight. We warned you. But you can offset the damage.

First and foremost, turn off (or change) any pre-set alarms on your mobile and other devices. No self-loathing is as bitter as being awakened at 2am by your own alarm, because your tablet hasn’t auto-updated to your new time zone.

Next, prepare to embrace your new time zone. Time your exposure to sunlight to ease your way in: get some rays in the late afternoon if you’ve travelled west, and retreat from sunshine in the evening if you’ve travelled east. Try to effect a mental shift and don't compare your time zone to the one you just left. Dwelling on the fact that your friends back home are just getting up/going to bed? That way madness lies. 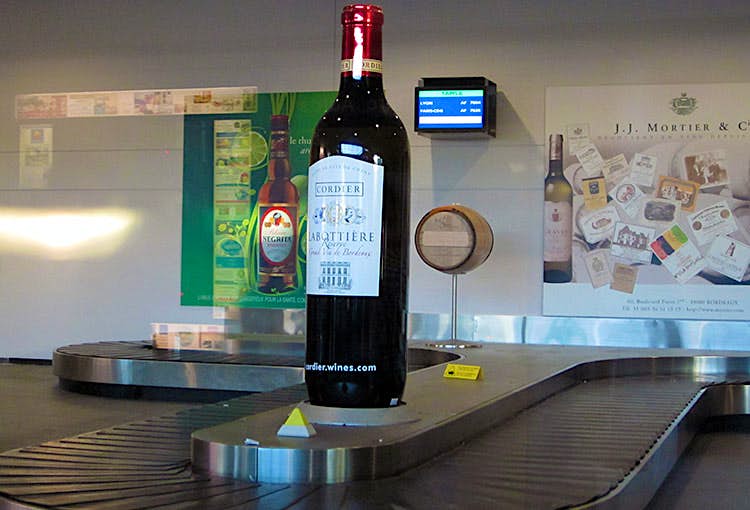 Wine on arrival: never as good an idea as it seems. Image by Meg Errey / CC BY-SA 2.0

Clasp your trembling hands around a coffee (science backs you on this one) but only if you have a seven-hour period of wakefulness ahead. Using an espresso crutch to survive a couple of hours will disrupt your sleep. Drink plenty of water and resist the urge to get buzzed from sugary drinks.

When it is (finally) time to sleep in your destination, have earplugs and eyeshades handy. If you awake in the night (and oh, you will) you’ll be more likely to drift back to sleep if you aren’t distracted by your surroundings and that weird ticking sound.

Can’t I simply drug my way through this living hell?

Not quite, although melatonin has been proven to have great results. This hormone already regulates your sleep rhythms, and a synthetic dose speeds your adjustment to a new time zone. Availability of melatonin varies from place to place: it’s classed as a dietary supplement in the USA but a prescription is required in Australia. While some hail it as a miracle cure, the effects of long-term use aren’t widely understood and some say the timing of a melatonin dose is crucial to its efficacy. 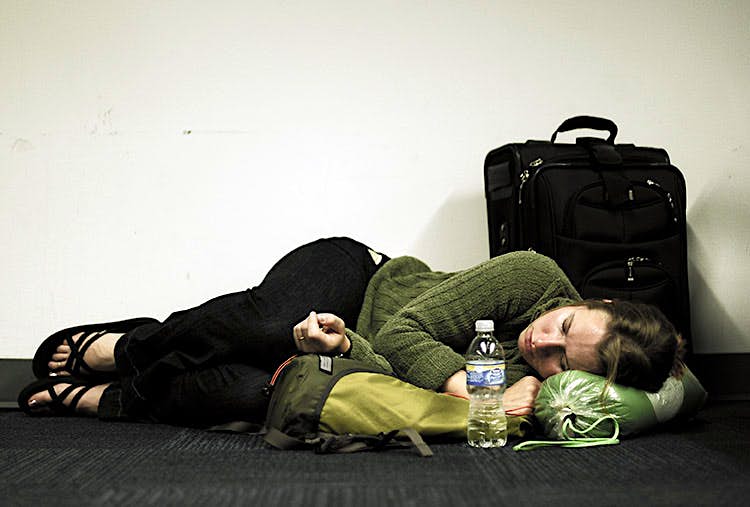 You don't need a reclining seat or business lounge to catch some Zs. Image by Britt Selvitelle / CC BY 2.0

Still looking for that elusive jet lag cure? We asked Lonely Planet’s well-travelled staff for their personal tips (try some of these at your peril).

My favourite explanation for jet lag is soul delay. William Gibson explains that this is when your body arrives after a long flight, but your soul can’t travel as fast as a jet and you can become discombobulated while you wait for your soul to catch up. If you have a couple of hours in transit as part of a long-haul flight, it’s tempting to try to find a quiet place to nap, but I’ve found I bounce back better if I keep moving. Walk around the airport terminal as much as possible, get your blood circulating.

When taking a red-eye I always rock sunglasses in the airport and on the airplane to help me sleep on the plane. Again it’s helping my body tell me that it’s time to go to sleep rather than being overly stimulated by the fluorescent lighting. The unfortunate side-effect of this is that I look like an LA jerk. Also as soon as I land I try to sit out in the sun for at least 10 minutes.

Often a handful of air miles is all that stands between you and the sanctuary of a cosy flat bed in Business Class - on some airlines, redeeming miles or points for long-haul upgrades can be an even better deal than using them for short-haul flights, for example. Just make sure you don't waste the opportunity for a proper sleep by taking too much advantage of the better booze selection!

Embrace jet lag and its attendant insanity. Twenty-four-hour karaoke in Japan, early-morning markets in London, sunrise in Sydney - amazing travel experiences await those with jet lag and insomnia. So if you can’t beat jet lag, see where your sleep rhythms (and that hazy sense of surreality) take you. Unless you’re coming home, in which case it’s every shade of awful.

Drink and dance until you collapse

Get off the plane, and once arrived in your destination go out for drinks and dancing until your body is almost awake for 27 hours apart from a three-hour nap on the plane. You’ll be so disoriented that you will sleep like a baby. (Note: this has only worked for me once.)

Anita Isalska is a writer and editor at Lonely Planet and it takes her less than an hour after landing to give in and medicate her jet lag with chocolate and alcohol. Follow Anita on Twitter @lunarsynthesis. 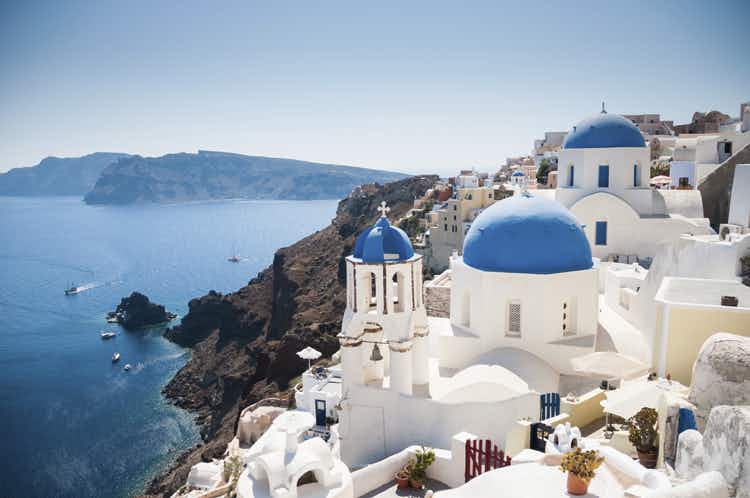 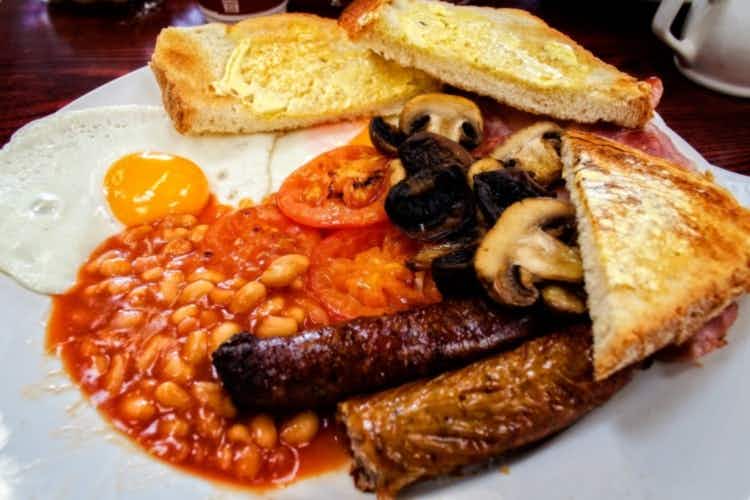 Best hangover foods from around the world