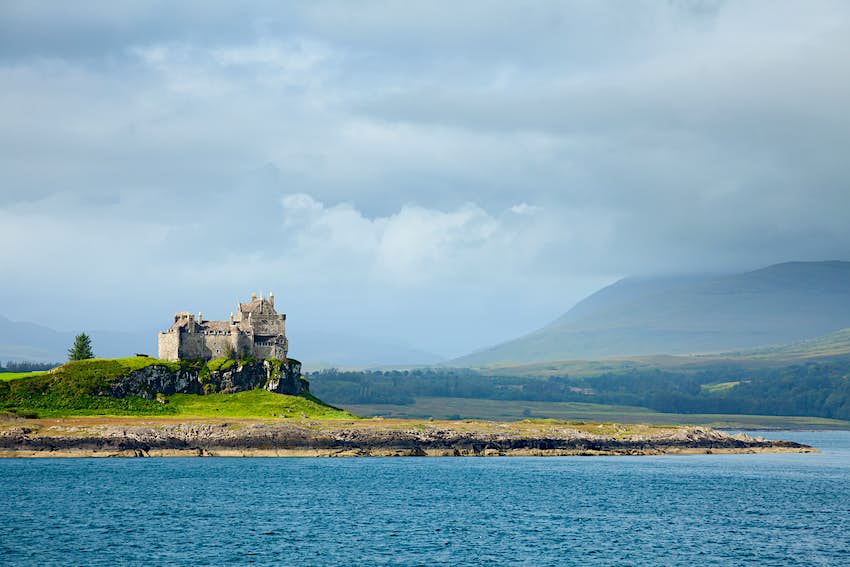 An emerald shore receding behind, a sea breeze in your face, a dolphin surfing the bow wave as escort. The magic begins as soon as you board the ferry from Scotland’s rugged west coast and head for the Hebrides, a scattering of more than 50 inhabited islands that take in the stirring mountainscapes of Skye and the green jewel of Iona, the whisky paradise of Islay and the stern ancient stones of Lewis.

There are few more beautiful places on Earth than the Hebrides. Some of Europe’s best beaches are on these Scottish islands (don’t expect to return home with a tan), while remoteness and underpopulation mean that wildlife displaced elsewhere still flourishes. That very same isolation – Edinburgh seems another world, and London is outside the Hebridean solar system – means that life has traditionally been a tough, self-reliant affair.

Buildings and towns are usually practical bases rather than an end in themselves. So lace up the hiking boots, grab binoculars or a paddle, fortify yourself with a local dram and get ready to explore Scotland's Hebrides islands.

Best things to do on the Hebrides

Visiting the Hebrides is about being outdoors. Throughout the islands, there’s great walking, from pacing the sublime sandy beaches of Barra, Tiree or Harris to tackling the rugged challenge of Skye’s Cuillin Hills or the Paps on Jura. To get out on the water, sea-kayaking is a great option on Barra, Skye and other islands. Bicycles are easily taken on ferries, though high winds can make for tough pedaling at times.

Scotland’s reputation for cooking used to be more Michelin man than Michelin star, but times have changed, and it’s the western islands’ sustainable fruits of the sea that have led the charge. Langoustines and crabs fresh off the boat, hand-dived scallops, and tasty mussels and oysters mean the Hebrides are a seafood paradise. Lamb and beef from heather-grazing free-roaming animals are delicious, while Stornoway is famous for its black pudding. Try accompanying your meal with one of the local single-malt whiskies. There’s enough variety that you’ll be able to match any flavor.

The Hebrides are a particular haven for birds and aquatic mammals. The northwest – especially Skye and the Western Isles – is great for spotting otters along the shore. Mull is one of Britain’s best spots for whale watching, and dolphins and porpoises are also common. You’re almost guaranteed to see seals, both the Atlantic grey (look for its Roman nose) and the common seal (recognizable by its doggy face). Birdwatchers flock to Islay and the Uists to see the corncrake, while Harris offers golden eagles. Seabirds – gannets, fulmars, puffins and more – thrive on jagged coasts, and geese of various species often outnumber residents.

Majestic stone carvings and crosses from this outpost of early Christianity dignify several of the islands, most notably Iona. But these are modern architecture compared to the Dun Carloway broch of Lewis, some 2000 years old, and the Callanish standing stones, weighing in at some four and a half millennia, roughly contemporary with the Great Pyramid of Giza. The castles studded across the islands are relative newcomers, built by various clan chiefs – including the Lords of the Isles, who ruled the whole of the Hebrides and some of the Scottish mainland in the 14th and 15th centuries.

Tips for visiting Islay and Jura

The friendliest of islands, Islay (eye-la’) is the home of several of the world’s best whiskies – many famed for their peatiness – whose names reverberate on the tongue like a pantheon of Celtic deities: Ardbeg, Laphroaig, Lagavulin, Caol Ila, Bunnahabhain, Kilchoman, Bruichladdich, Bowmore. Stellar seafood and brilliant birdwatching are other reasons to come. The adjacent island of Jura provides the spectacular scenery, with its brooding twin hills, the Paps, providing habitat for an enormous deer population. The ferocious Corryvreckan whirlpool churns away at the north of the island, near where George Orwell wrote 1984.

Where to stay and eat on Islay and Jura

Islay and Jura are short on accommodations for the number of visitors they receive in spring and summer, so always book ahead. Get the best of Islay seafood and whisky, as well as seriously comfortable Victorian accommodation, at the Port Charlotte Hotel.

How to get to Islay and Jura

Loganair flies up to three times daily from Glasgow to Islay, and Hebridean Air Services operates twice daily on Thursday from Oban to Colonsay and Islay. There are two ferry terminals: Port Askaig on the east coast, and Port Ellen in the south. Ferries are run by CalMac.

A car ferry shuttles between Port Askaig on Islay and Feolin on Jura. There is no direct car-ferry connection to the mainland. From April to September, Jura Passenger Ferry runs from Tayvallich on the mainland to Craighouse on Jura.

Visiting the Isle of Mull

Scenically stunning, with a mountainous backbone dropping to limpid waters, Mull has some of the finest Scottish scenery in a small, varied package, culminating in the spectacular angular hills dropping almost sheer into Loch Na Keal. The enchanting holy island of Iona just offshore is another huge attraction, while Mull’s main town, Tobermory, with its row of colorful houses and excellent pub, is one of the Hebrides’ most characterful settlements. Hillwalking, whale-watching excursions and boat trips to weird Fingal’s Cave on uninhabited Staffa are top choices for local activities.

Where to stay and eat on Mull

There's a good range of accommodations across the island, from rustic campsites to hostels, B&Bs and luxurious small hotels. One of our favorite Scottish hostels is Iona Hostel, a working sheep croft. For something fancier, Highland Cottage in Tobermory is enchantingly intimate. Cafe Fish is a sustainable seafood star, while the Mishnish Hotel is one of the islands’ top spots for a pint.

How to get to Mull

CalMac has three car ferries that link Mull with the mainland: Oban to Craignure (the busiest route), Lochaline to Fishnish and  Tobermory to Kilchoan.

Visiting the Isle of Skye

The Isle of Skye is the largest of Scotland’s islands and also one of its most spectacular. An ethereal light squeezes through the clouds and bathes a rugged splendor that reaches sublime levels with the Cuillin Hills. Skye is a spot for everyone, with walkers plotting their routes on a dozen major hills, sea-kayakers exploring coves and coast, and visitors cruising the island’s castles or sheltering from the drizzle in some of Skye's inviting pubs.

Where to stay and eat on the Isle of Skye

Skye is one of Scotland's most popular tourist areas, and it offers a wide range of accommodations, from basic campsites and hostels to luxury hotels. The latest trend is glamping (luxurious camping), and in the last few years many places have installed distinctive timber camping "pods." The Isle of Skye's popularity means that it's always best to book ahead. For country hospitality, the Toravaig House Hotel offers the warmest of welcomes, while Three Chimneys combines stellar food with comfortable accommodations.

How to get to Skye

The Isle of Skye became permanently tethered to the Scottish mainland when the Skye Bridge opened in 1995. The crossing is free. There are buses from Glasgow to Portree and Uig via Crianlarich, Fort William and Kyle of Lochalsh, plus a service from Inverness to Portree.

Despite the bridge, there are still a couple of ferry links between Skye and the mainland. Ferries also operate from Uig on Skye to the Outer Hebrides. The CalMac ferry between Mallaig and Armadale is very popular on weekends and in July and August. The Glenelg–Skye Ferry runs a tiny vessel (six cars only) on the short Kylerhea to Glenelg crossing.

Tips for visiting the Outer Hebrides

The Outer Hebrides (or Western Isles) are isolated, windswept, treeless places that have traditionally subsisted on fishing, weaving and livestock, though renewable energy is increasingly big business. Scottish Gaelic is a working language here. The principal island, its northern half called Lewis and its southern Harris, is spectacular, offering wonderful coastal scenery, ancient stone monuments, traditional turf-roofed blackhouses and the famous Harris tweed. To the south, the lonely Uist islands are prime nature-watching territory and connected by a causeway, while little Barra offers top sea-kayaking and the chance to watch the Glasgow flight land on the beach. Religion is deeply important in the Outer Hebrides. There’s a Sunday shutdown as locals spend a day of churchgoing, contemplation and bible-reading.

Where to stay and eat on the Outer Hebrides

The Outer Hebrides have all sorts of accommodation options, including basic campsites, hostels, B&Bs and hotels. A lot of accommodations close down from October to March. In a conserved village of traditional blackhouses on the Isle of Lewis, one has been modernized and can be rented out. On North Uist, Langass Lodge Restaurant is one of the best restaurants in the Outer Hebrides. It complements the best of local seafood, beef and game with vegetables and herbs grown in its own organic garden.

How to get to the Outer Hebrides

Loganair flights operate to Stornoway from Edinburgh, Inverness and Glasgow. There are also flights (weekdays only) between Stornoway and Benbecula. There are daily Loganair flights from Glasgow to Barra, and from Monday to Saturday to Benbecula. At Barra, the planes land on the hard-sand beach at low tide, so the schedule depends on the tides. There are CalMac two or three ferries a day to Stornoway, one or two a day to Tarbert and Lochmaddy, and one a day to Castlebay and Lochboisdale.

This article was originally published in May 2014.

You might also like:
I would drive 500 miles: road-tripping the Scottish Highlands
Up Helly Aa: Shetland’s Viking fire festival
Scotland’s wild isles: a nature-packed tour of the Southern Hebrides 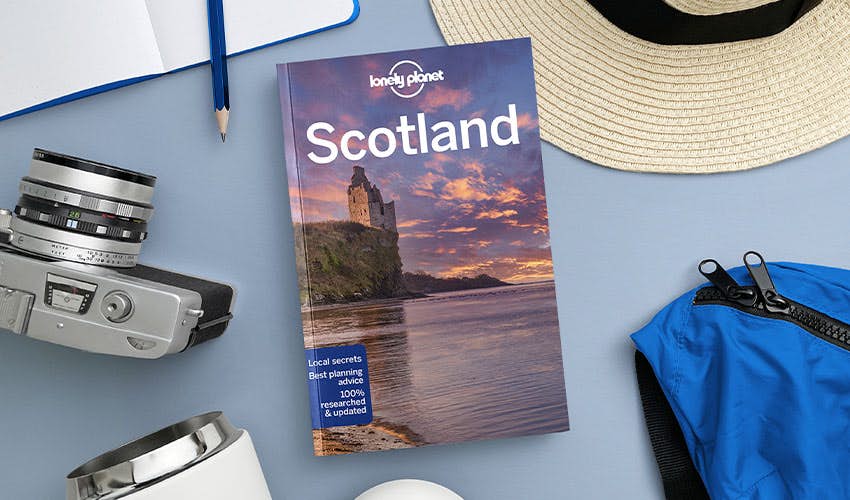 Get to the heart of Scotland with Lonely Planet's travel guide

Lonely Planet’s Scotland is our most comprehensive guide that covers all the country has to offer. Ideal for travelers that are visiting for an extended time and want to tailor their own trip. Taste local varieties of whisky, walk the West Highland Way, and explore the Edinburgh Castle.

Florence's must-see museums: from the sublime to the Renaissance

Everything you need to know before traveling to Alaska