Burned out by the relentless pace of your city break? These on-the-doorstep parks are perfect when you need to escape from the urban jungle.

From sea cliffs south of London to a beach on the fringes of Hong Kong and a fanciful chateau on the edge of Paris, it’s worth taking time out of your hectic sightseeing schedule for these soul-soothing day trips.

Walking along chalk sea cliffs will be the thing you’ll mention when people ask what was the highlight of your trip to London. It takes less than two hours by train to reach Britain’s newest national park (southdowns.gov.uk) and what feels like the edge of the earth.

You imagine this is what Jane Austen, who lived in Hampshire not far from here, would have seen: the stark white Seven Sisters Cliffs and sheep-and-straw bale sprinkled hills. It’s easy to pass a day exploring the South Downs Way, a beautiful 100-mile footpath, or biking some of the park’s 1200 kilometers of bridleways.

Before returning to the bustle of London, unwind at The Tiger Inn (beachyhead.org.uk/the_tiger_inn), a pub with 15th century heritage and a delicious South Downs Ale from local Beachy Head Brewery that pairs well with The Classic Tiger Burger.

How to get there: Download the South Downs National Park app on the train ride from London Victoria station to Eastbourne. From Eastbourne, take a 20-minute ride on the local #13 bus to Beachy Head, a short walk to the cliffs. Admission to the park is free.

Can’t make it? Visit Holland Garden, a 10-minute walk from High Street Kensington Station, for a game of cricket or picnic in the Kyoto Garden.

When New Yorkers need a break from the urban jungle, 52,000-acre Harriman State Park – the second biggest park in the state – is their go-to escape.

After a breezy bus ride up the Hudson River, you’ll disembark near the park, where you’ll find 235 miles of hiking trails, 36 lakes and ponds, two public beaches and plenty of wild berry picking (July through September).

Do the 7.5-mile Island Pond/Lemon Squeezer Loop that touches on the famous Appalachian Trail and offers a refreshing dip in a setting that feels light years from NYC, even though it’s just an hour away.

How to get there: From Port Authority Bus Terminal, take the Short Line bus to Southfields and request to be dropped off at Arden Valley Road next to a "Welcome to Harriman State Park" sign. Make a right on to Arden Valley Road, go across the bridge over the NY State Thruway, then follow the white A.T. markers until you see signs for Lemon Squeezer. The park is open year round and admission is free, though drivers will pay $8 for a spot in the Bear Mountain State Park lot during the summer or winter weekends.

Can’t make it? Central Park may be an iconic spot but Wave Hill (wavehill.org), a 28-acre public garden overlooking the Hudson River and Palisades, is arguably more beautiful and less likely to be overrun by tourists. Take the 1 or 2 Subway line to 242nd Street in the Bronx.

Resolute Beach is just over half an hour from Sydney. Image by Keven Osborne/Fox Fotos / Lonely Planet Images / Getty Images

If you’ve gone all the way to Sydney, you might as well venture further than Bondi Beach and the Opera House, and head 40 minutes north of the city to Ku-ring-gai Chase National Park.

The options for outdoor fun are endless – and less well known – whether you want to swim in the turquoise waters at Resolute Beach, cycle along the breathtaking Mount Colah Station to Pymble Station route, or enjoy rewarding hikes to Upper Gledhill Falls, Aboriginal sites and Barrenjoey Lighthouse.

How to get there: The park, which is open from sunrise to sunset, is a 40-minute drive from downtown Sydney. There’s an $11 entry fee per vehicle. If you take a bus or taxi, the daily entry fee is $4.40 per adult and $2.20 per child.

Can’t make it? Revel in the secluded swim holes and bushwalking trails of Bradley's Head Walk along the shoreline in Sydney Harbour National Park; try The Surf Club at Nielsen Park restaurant for a beachside drink.

When you’re hiking in a place like North Cascades National Park, home to 300 glaciers and uncanny beauty, you get why people living in Seattle can put up with all that rain.

The Emerald City is the perfect base camp from which to set out on myriad outdoor adventures surrounded by the country’s most stunning landscapes. There’s Olympic National Park to the west, Mt Rainier to the south, and two hours to the north in North Cascades National Park, you can climb into the heavens without needing heavy gear or a lot of time.

Whether you choose to take the moderate four-mile Blue Lake Trail with views of Liberty Bell Mountain and the striking South Early Winter Spire, or the more strenuous and scenic seven-mile Maple Loop Pass, you’ll want to pack a hammock and hang a while.

Can’t make it? Tucked along the Seattle waterfront, a seven-minute bike ride from Pike Place, Myrtle Edwards Park is a prime picnic spot for its views of Mt Rainier and Puget Sound and neighboring Olympic Sculpture Park.

After visiting Maison de Victor Hugo and Maison de Balzac, ride the train out of Paris to the hills of Le Port-Marly and into the wild imagination of Alexandre Dumas, author of The Three Musketeers, The Man in the Iron Mask, and The Count of Monte-Cristo, for which his chateau, built in 1846, is named.

While the regal interior of his Gothic- and Renaissance-style residence is worth a tour, the grounds are the true spectacle. “I have created here a miniature paradise on earth,” Dumas once said, and you’ll understand why as you explore his private park – which feels like something out of a Wes Anderson movie – and writing studio, Château d'If.

Walk through caves and English gardens in the footsteps of guests like Victor Hugo, George Sand and Honore de Balzac, admiring the many fascinating details Dumas created to bring his literary adventures to life.

How to get there: The chateau is a 50-minute drive from Paris and is also accessible via the commuter and high-speed rail. Visit chateau-monte-cristo.com for various transit options. Admission is €6 Tuesday to Sunday until 1pm.

Can’t make it? The Bois de Boulogne may not be an under-the-radar park, especially with the recent opening of the Frank Gehry-designed Fondation Louis Vuitton, but its more than 2000 beautiful acres offer plenty of serene spots to escape the city for a little while. Take a boat out on Lac Inferieur, making sure to row by The Grand Cascade waterfall, and have lunch at the newly renovated Le Chalet des Iles.

A track leading deep into the forest of Tyresta National Park. Image from Wikimedia Commons.

After a few days of sightseeing around the capital – getting your fill of art at the Moderna Museet, pale lagers and meatballs at a Swedish beer hall like Pelikan, and experiential Swedish music at Fylkingen (not to mention hopping between Stockholm’s 14 islands) – an outing to Tyresta National Park is sure to restore the mind, body and soul.

Situated just 12 miles south of Stockholm’s city center, this forest dates back to the Iron Age and has 40 miles of trails and eight hiking routes; breathe in the fresh air along a three-mile path that goes by Lake Bylsjon, 500-year-old pine trees, purple meadows, and the occasional howling Western Capercaillie.

Get the ancient woodlands to yourself by arriving early during the more popular months of April to September. Before heading back to Stockholm, visit the park’s Sweden-shaped Naturum Nationalparkernas Hus and marvel at the well-preserved 18th century buildings in the village of Tyresta.

How to get there: Take Bus 807 or 809 from Gullmarsplan to the Svartbacken stop, then take the connecting Bus 834 and get off at the Tyresta By station near the park’s main entrance. The park is open year round and admission is free.

Can’t make it? You could easily spend a day basking outdoors on the island of Djurgarden (visitdjurgarden.se), getting swept up in the biodynamic beauty of Rose’s Garden and picnicking alongside grazing Scottish Highland cattle from May to September in Isbladskarret Fen. Just make sure to carve out time for a meal at Oaxen (oaxen.com).

If you’ve never been to Hong Kong, you’re more likely to think of a glittering skyline than a glistening seaside. But an hour northeast of the city is a slice of unexpected paradise. Long Ke Wan, the most beautiful beach in Hong Kong, is accessible by Section 1 of the MacLehose Trail, which leads to some unusual rock formations and gaping sea caves. Bring food and water as there is nothing here but pristine stretches of sand and the tranquil blue-green South China Sea.

How to get there: Take the MTR Bus to Diamond Hill (Kwun Tong Line), then either take Exit C to bus terminals and hop on a green minibus 1A to Sai Kung, or follow exits to the taxi stand and hire a red taxi to Sai Kung. Once at Sai Kung, change to a cheaper green taxi the rest of the way to the entrance for Long Ke Wan. Make sure to get out at the end of the road and walk the remaining 20 minutes over the hill to the beach, which is free to enjoy.

Can’t make it? Despite the backdrop of tall buildings and the bustling Kowloon location, Nan Lian Garden is designed to feel like a verdant sanctuary, with its noise-cancelling border of Buddhist Pine, Cypress and Japanese Black Pine trees, and calming waterfalls, ponds and pagodas. 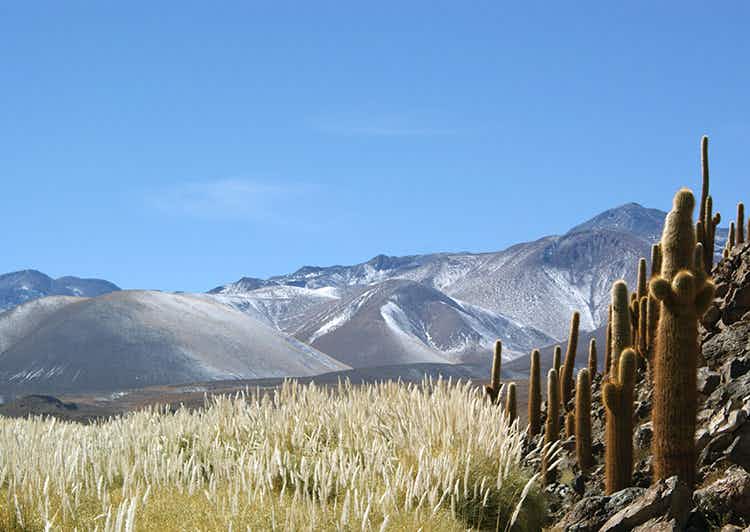 Adventures in the Atacama Desert: top experiences in northern Chile’s… 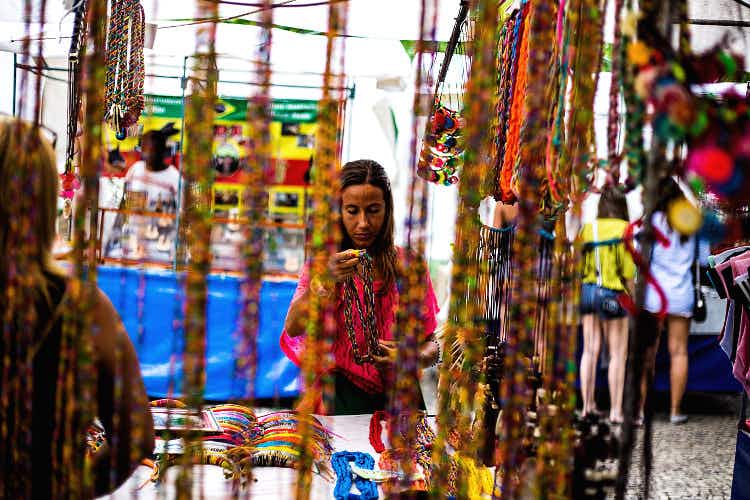 Retail in Rio: the carioca guide to shopping