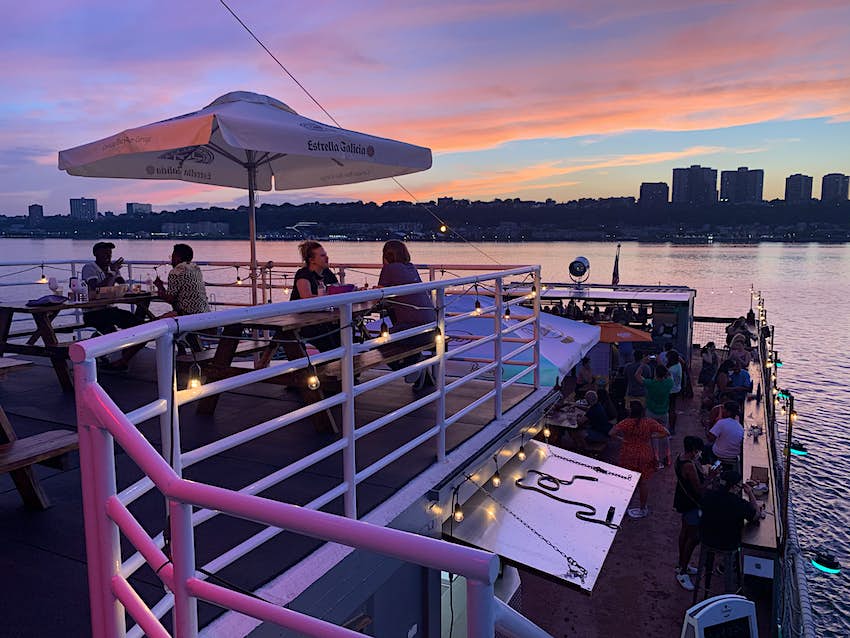 It’s been called the world’s smallest aircraft carrier, and now the 125-foot Baylander is docked in the Hudson River, just off 125th Street in Manhattan, serving as a summery watering hole in New York City.

Located at the West Harlem Piers, Baylander Steel Beach began welcoming guests aboard in early July, but its history goes back much further than that. The ship began its naval service in 1968 as a harbor utility craft in the Vietnam War, then became a helicopter landing trainer for the Navy, Air Force, Marines, Coast Guard and National Guard in 1986, notching more than 120,000 error-free landings during its time on the water.

The Baylander (IX-514) was acquired at auction in 2012, and by 2014, the vessel had dropped anchor at Brooklyn Bridge Park, opening to the public for tours, programming, and events. A year-and-a-half later, it had made its way uptown to Harlem, and after much time spent chasing permits, waiting for the storage containers – once used in Afghanistan, soon to become the restaurant’s kitchen and bar – to clear customs, and sitting out during the city-imposed coronavirus closures, Baylander Steel Beach finally opened.

Today, the main deck’s socially-distanced picnic tables provide plenty of elbow room for warm-weather fare like lobster rolls and fried clams, as well as aptly named cocktails (Damn the Torpedoes, Captain’s Crush) in the $10 to $13 range. Nautical artifacts serve as decor, from the bathroom to the bar.

“If you were to talk to me July 3rd and given me an option to get out, I might have walked away,” the restaurant's owner, Michael Trenk, tells Lonely Planet. The goal going into 2020, he says, was to open up May 1st, but when restaurants and bars were forced to close in mid-March, it seemed bleak for the Baylander. “How can I possibly open up?” Trenk remembers thinking. “How can I even think of doing anything that would jeopardize someone's health?”

But by June, things were looking up, and when the Baylander launched the following month with safety protocols – temperature screenings, lots of hand sanitizer, and mandatory masks when meandering about the boat – firmly in place, people responded in a big way. “We've given our guests a pre-COVID New York City experience,” Trenk says. “When you're at a table, and you're surrounded by open air, and good drinks, and good food and fun music, and there's a lively energy, people are like, ‘this is great.’”

How to get around Québec City like a local

Kraków on a budget: how to tour Poland's cultural capital on the cheap

3 min read • Published about 15 hours ago