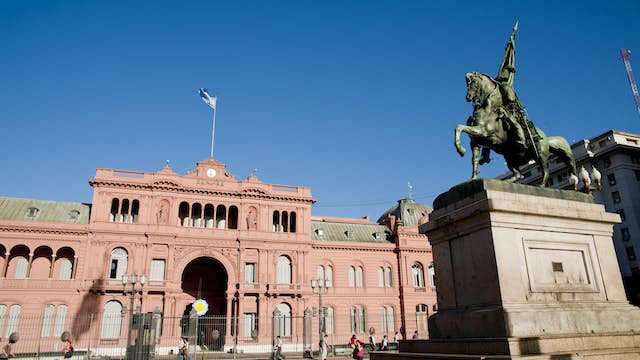 The Casa Rosada was named for its distinctive color. It was from the balcony here, at the presidential palace, that Eva Perón famously addressed the throngs of impassioned supporters packed into Plaza de Mayo. (Note that the building houses offices; the presidential residence is in the northern suburb of Olivos.) Free hour-long guided tours are given on weekends and must be booked online in advance; bring ID.

The building occupies the site where colonial riverbank fortifications once stood; today, however, after repeated landfills, the palace stands more than 1km inland. The interesting Museo Casa Rosada is located behind the palace.

One theory goes that the Casa Rosada's pink hue represented President Sarmiento's attempts to make peace during his 1868–74 term (by blending the red of the Federalists with the white of the Unitarians), but the more likely explanation is that it was caused by mixing white paint with bovine blood, a common practice in the late 19th century.