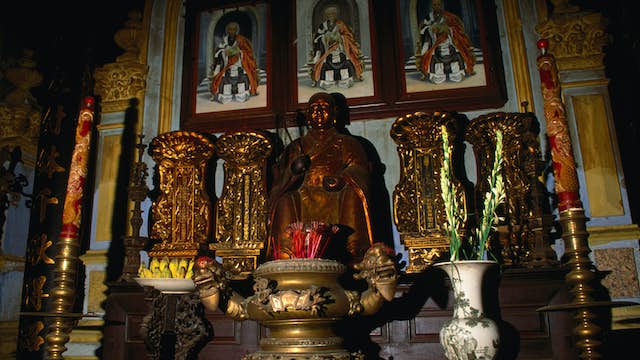 In a land where so many ancient temples have been ‘restored’ in concrete and neon, it’s a joy to discover one that looks its age. The temple has an atmosphere of scholarly serenity, and its secluded location down an alley near Dam Sen Lake means it is less visited than other temples in nearby Cholon. It was founded by Hai Tinh Giac Vien in the late 1700s and it is said that Emperor Gia Long, who died in 1819, used to worship here.

Hidden behind a warren of winding lanes, the approach to the pagoda has several impressive tombs on the right – a popular playground for local kids. The pagoda itself has some 100 lavish carvings of divine beings.

The main sanctuary is on the other side of the wall behind the Hai Tinh Giac Vien statue. The dais is set behind a fantastic brass incense basin with fierce dragon heads emerging from each side. The Guardian of the Pagoda is against the wall opposite the dais.