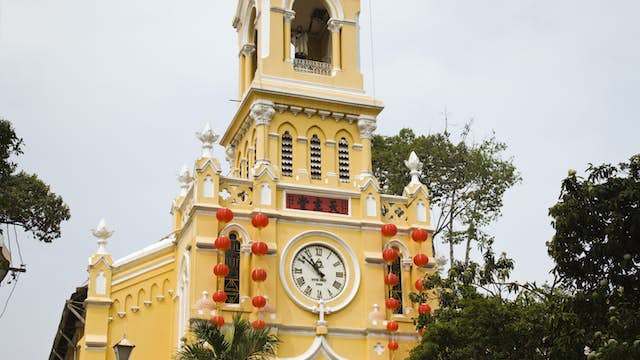 Built around the turn of the 19th century, this decaying light-caramel-painted church exudes a sleepy, tropical feel. A pew in the church is marked with a small plaque identifying the spot where President Ngo Dinh Diem was seized after taking refuge here with his brother Ngo Dinh Nhu on 2 November 1963, after fleeing the Presidential Palace.

When their efforts to contact loyal military officers (of whom there were almost none) failed, Diem and Nhu agreed to surrender unconditionally and revealed where they were hiding. The coup leaders sent an M-113 armoured personnel carrier to the church and the two were taken into custody. However, before the vehicle reached central Saigon the soldiers had killed Diem and Nhu by shooting them at point-blank range and then repeatedly stabbing their bodies.

When news of the deaths was broadcast on radio, Saigon exploded with jubilation. Portraits of the two were torn up and political prisoners were set free. The city’s nightclubs, which had closed because of the Ngos’ conservative Catholic beliefs, were reopened. Three weeks later the US president, John F Kennedy, was assassinated. As his administration had supported the coup against Diem, some conspiracy theorists speculated that Diem’s family orchestrated Kennedy’s death in retaliation.

The mint-green and white church interior is decorated with images of the stations of the cross, while holy water is dispensed from huge clam shells. The statue in the tower is of François Xavier Tam Assou (1855–1934), a Chinese-born vicar apostolic (delegate of the pope) of Saigon. Today the church has a congregation of around 3000 ethnic Vietnamese and 2000 ethnic Chinese. Masses are held daily.