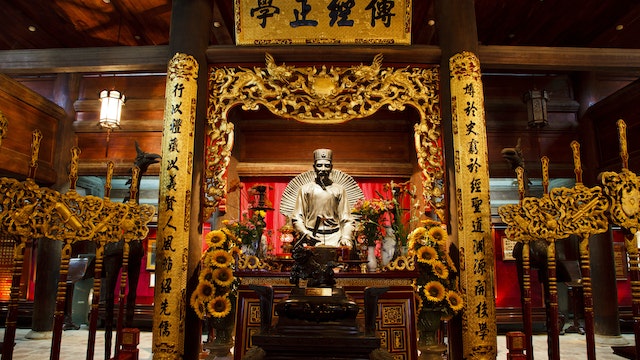 Set amidst landscaped grounds near the centre of Hanoi, the Temple of Literature honours Vietnam's finest scholars, and also offers visitors a chance to see a rare example of well-preserved traditional Vietnamese architecture.

Founded in 1070 by Emperor Le Thanh Tong, the attractive complex is dedicated to the Qufu-born philosopher Confucius (Khong Tu) and was the site of Vietnam’s first university, Quoc Tu Giam (1076). The altars are popular with students praying for good grades, while the halls, ponds and gardens of the five courtyards make picturesque backdrops for student graduation photos. The temple is depicted on the 100,000d note.

Originally university admission was exclusively for those born of noble families, but after 1442 it became more egalitarian. Gifted students from all over the nation headed to Hanoi to study the principles of Confucianism, literature and poetry. In 1484 Emperor Ly Thanh Tong ordered that stelae (large slabs) be erected to record the names, places of birth and achievements of exceptional scholars: 82 of 116 stelae remain standing, mostly atop turtle statues. Paths lead from the imposing tiered gateway on P Quoc Tu Giam through formal gardens to the Khue Van pavilion, constructed in 1802.

Hotels near the Temple of Literature

Hanoi has accommodation suited to every budget, though an extra US$10 to $20 makes a massive difference in quality: you could easily move from a windowless room to a larger space with a view, so splurge if you can. Good hotel options within walking distance of the Temple of Literature include Tomodachi House and Somerset Grand Hanoi, a 15-minute and 17-minute walk away respectively.