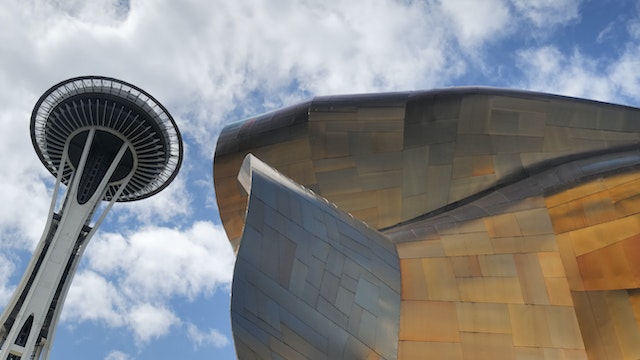 The Museum of Pop Culture (formerly EMP, the "Experience Music Project") is an inspired marriage between super-modern architecture and legendary rock-and-roll history that sprang from the imagination (and pocket) of Microsoft co-creator Paul Allen (1953–2018). Inside its avant-garde frame, you can tune into the famous sounds of Seattle (with an obvious bias toward Jimi Hendrix and grunge) or attempt to imitate the masters in the Interactive Sound Lab.

The highly unusual building with its crinkled folds colored in metallic blues and purples was designed by renowned Canadian architect Frank Gehry, a strong proponent of deconstructivism. Gehry – who designed the equally outlandish Guggenheim Museum in Bilbao, Spain – supposedly used one of Hendrix’s smashed-up guitars as his inspiration.

The main exhibit hall is anchored by If VI Was IX, a tower of 700 instruments designed by German-born artist Trimpin. Many of the permanent exhibits center on Hendrix, including the Fender Stratocaster guitar that he played at Woodstock in 1969. There's also a nostalgic slice of grunge memorabilia in a section entitled "Nirvana: Taking Punk to the Masses." Dominating proceedings on level 2 is the Sky Church, a huge screen displaying musical and sci-fi films.

Most of the 3rd floor is given over to the interactive Sound Lab, where you can lay down vocal tracks, play instruments, fiddle with effects pedals and – best of all – jam in several mini studios. "On Stage" takes things further, allowing you the opportunity to belt out numbers under stage lights with a virtual audience.

A separate Science Fiction Museum opened on the site in 2004 and, in 2012, was incorporated into the Museum of Pop Culture in a permanent 2nd-floor exhibit called "Infinite Worlds of Science Fiction" that displays artifacts from iconic films and TV shows. Expect to come face to face with a Doctor Who Dalek, a Terminator 2 skull and, more topically, plenty of Star Wars life forms and film props.

Tying in with the museum's sci-fi theme is the "Scared to Death" exhibition on Level 2, subtitled "The Thrill of Horror Film." Unveiled in 2013, the displays were dreamed up by three horror film directors, including John Landis of An American Werewolf in London fame. Shocking stuff on show includes Jack's ax from The Shining and Michael Jackson's zombie costume from Thriller. Scary or not, they've earned the exhibit a PG13 rating!

Adjacent to the museum is the Seattle Center Armory, which sports a food court full of familiar franchises on its ground floor.

You can get booze and food any time of day at the neighborhood institution 5 Point Café a few blocks south of the Seattle Center.

The museum offers timed ticketing and plan-ahead pricing. If you plan to visit several attractions while in Seattle, you can purchase package deals.