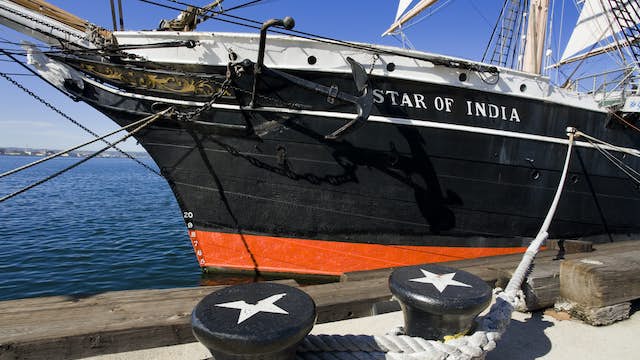 Next to the new Waterfront Park, this collection of 11 historic sailing ships, steam boats and submarines is easy to spot: just look for the 100ft-high masts of the iron-hulled square-rigger Star of India, a tall ship launched in 1863 to ply the England–India trade route.

Also moored here is a replica of the San Salvador that brought colonial explorer Juan Rodriguez Cabrillo to San Diego's shore in 1542. It's easy to spend hours looking at exhibits and clambering around vessels.

As the world’s oldest active sailing ship, the Star of India is the museum's star attraction. With its history of collisions, cyclone damage and 21 circumnavigations around the world, it's surprising this iron-hulled yacht is still afloat. Yet here she is, her thick sails blustering in the breeze. The cabins, the hull and much of the onboard equipment are all original.

For more than two decades, the Russian Foxtrot Class attack submarine B-39, which sits in the water of the Maritime Museum of San Diego, followed US and NATO warships across the world with 24 torpedoes onboard should they be required.

Known as the Black Widow, the sub was originally installed for a temporary exhibition in 2005, but it proved so popular that it's still onsite. However, recent storm damage to its exterior has left the bare metal beneath to rust.

The museum hopes to allow visitors to board the B-39 for one last time in 2021 before it is moved.

The museum also offers trips on some of the boats. Options include a four-hour sail on the replica gold-rush-era schooner Californian, the official tall ship of the state of California (adult/child $79/52) and a plunge into San Diego's military legacy on a 75-minute ride aboard a swift boat (adult/child $30/20).

Located at 1492 N Harbor Driver, the Maritime Museum of San Diego is open 9am-9pm (late May-early Sep) and 9am-8pm for the rest of the year.

Tickets can be booked online in advance. Walk-up tickets are generally available at the ticket booth, until 4pm. Discounted tickets sometimes appear online through websites like Groupon.