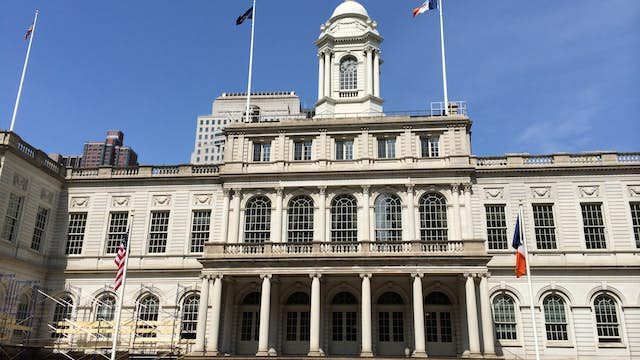 This Federal-style beauty has been home to NYC's government since 1812, and free guided tours of the building run twice weekly (you'll need to book a few weeks ahead online; search for 'city hall tours' on www.nyc.gov). Tours take in the building's elegant coffered rotunda, the City Council chamber, and the Governor’s Room, which is where you'll see portraits by John Trumbull, George Washington’s writing table and the remnants of a flag flown at the first president’s 1789 inaugural ceremony.

Penny-pinching officials neglected to finish City Hall's northern side in marble, finishing the northern facade in brownstone and reducing the size of the building overall. The domed tower was rebuilt in 1917 after being damaged by two fires, and the original marble (and brownstone) facades were replaced with limestone over a granite base in 1954–56. Its beautiful restoration prompted critic Ada Louise Huxtable to call it a ‘symbol of taste, excellence and quality not always matched by the policies inside.’

Out front is bustling City Hall Park, graced with gas lamps, fountains, chess tables, public art and the odd protester. It's a fine place to kick back with a sandwich for a spot of people-watching.