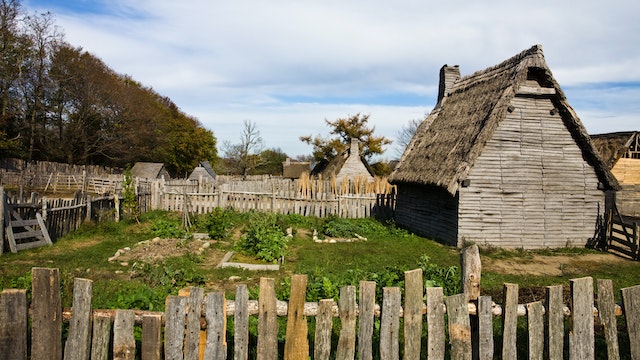 Three miles south of Plymouth center, Plimoth Plantation authentically re-creates the Pilgrims’ settlement in its primary exhibit, entitled 1627 English Village. Everything in the village – costumes, implements, vocabulary, artistry, recipes and crops – has been painstakingly researched and remade. Costumed interpreters, acting in character, explain the details of daily life and answer your questions as you watch them work and play.

During the winter of 1620–21, half of the Pilgrims died of disease, privation and exposure to the elements. But new arrivals joined the survivors the following year, and by 1627 – just before an additional influx of settlers founded the colony of Massachusetts Bay – Plymouth Colony was on the road to prosperity. Plimoth Plantation provides excellent educational and entertaining insight into what was happening in Plymouth during that period.

In the crafts center, you can help artisans as they weave baskets and cloth, throw pottery and build fine furniture using the techniques and tools of the early 17th century. Exhibits explain how these manufactured goods were shipped across the Atlantic in exchange for Colonial necessities.

The Wampanoag Homesite replicates the life of a Native American community in the same area during that time. Homesite huts are made of wattle and daub (a framework of woven rods and twigs covered and plastered with clay); inhabitants engage in crafts while wearing traditional garb. Unlike the actors at the English Village, these individuals are not acting as historic characters but are indigenous people speaking from a modern perspective.