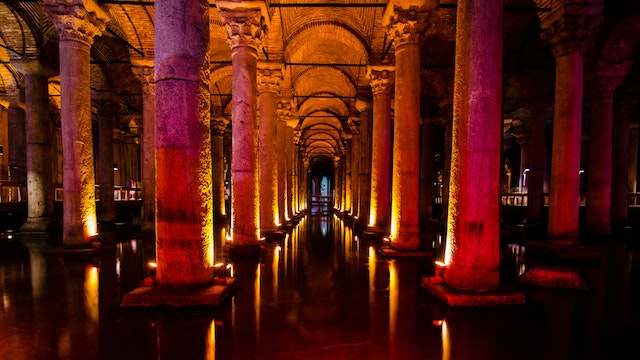 This subterranean structure was commissioned by Emperor Justinian and built in 532. The largest surviving Byzantine cistern in İstanbul, it was constructed using 336 columns, many of which were salvaged from ruined temples and feature fine carved capitals. Its symmetry and sheer grandeur of conception are quite breathtaking, and its cavernous depths make a great retreat on summer days.

Like most sites in İstanbul, the cistern has an unusual history. It was originally known as the Basilica Cistern because it lay underneath the Stoa Basilica, one of the great squares on the first hill. Designed to service the Great Palace and surrounding buildings, it was able to store up to 80,000 cu metres of water delivered via 20km of aqueducts from a reservoir near the Black Sea, but was closed when the Byzantine emperors relocated from the Great Palace. Forgotten by the city authorities some time before the Conquest, it wasn't rediscovered until 1545, when scholar Petrus Gyllius was researching Byzantine antiquities in the city and was told by local residents that they were able to obtain water by lowering buckets into a dark space below their basement floors. Some were even catching fish this way. Intrigued, Gyllius explored the neighbourhood and finally accessed the cistern through one of the basements. Even after his discovery, the Ottomans (who referred to the cistern as Yerebatan Saray) didn't treat the so-called Underground Palace with the respect it deserved – it became a dumping ground for all sorts of junk, as well as corpses.

The cistern was cleaned and renovated in 1985 by the İstanbul Metropolitan Municipality and opened to the public in 1987. It's now one of the city's most popular tourist attractions. Walking along its raised wooden platforms, you'll feel water dripping from the vaulted ceiling and see schools of ghostly carp patrolling the water – it certainly has bucketloads of atmosphere.