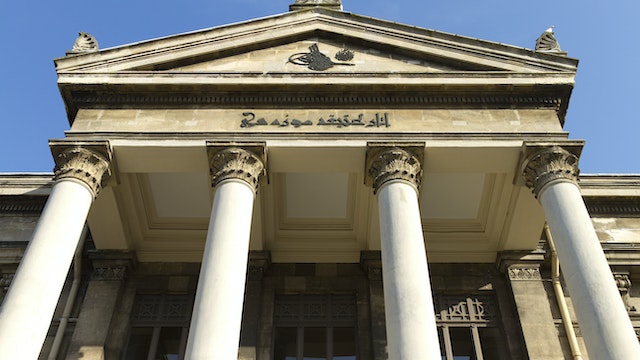 The city's foremost archaeological museum is housed in three buildings close to Topkapı Palace. There are many highlights, but the sarcophagi from the Royal Necropolis of Sidon are particularly striking. Currently undergoing a massive renovation, much of the main building is closed and only the Tiled Pavilion, Museum of the Ancient Orient and Ancient Age Sculpture section (where the sarcophagi are displayed) can be visited. The remaining exhibits are due to reopen in 2020.

The complex has three main parts: the Museum of the Ancient Orient (Eski Şark Eserler Müzesi), the Archaeology Museum (Arkeoloji Müzesi) and the Tiled Pavilion (Çinili Köşk). These museums house the palace collections formed during the late 19th century by museum director, artist and archaeologist Osman Hamdi Bey. The complex can be easily reached by walking down the slope from Topkapı's First Court, or by walking up the hill from the main gate of Gülhane Park.

Museum of the Ancient Orient

Located immediately on the left after you enter the complex, this 1883 building has a collection of pre-Islamic items gathered from the expanse of the Ottoman Empire. Highlights include an 8th-century BC Hittite moulding of a rock relief depicting the storm god Tarhunza and a series of large blue-and-yellow glazed-brick panels that once lined the processional street and the Ishtar gate of ancient Babylon. The latter depict real and mythical animals such as lions, dragons and bulls.

On the opposite side of the column-filled courtyard to the Museum of the Ancient Orient is this imposing neoclassical building, parts of which were undergoing renovation when we visited. It houses an extensive collection of classical statuary and sarcophagi plus exhibits documenting İstanbul's ancient, Byzantine and Ottoman history.

The museum's major treasures are sarcophagi from sites including the Royal Necropolis of Sidon (Side in modern-day Lebanon), unearthed in 1887 by Osman Hamdi Bey. Don't miss the extraordinary Alexander Sarcophagus and Mourning Women Sarcophagus.

The northern wing of the museum houses an impressive collection of ancient grave-cult sarcophagi from Syria, Lebanon, Thessalonica and Ephesus (Efes), including impressive anthropoid sarcophagi from Sidon. Three halls are filled with the amazingly detailed stelae and sarcophagi, most dating from between AD 140 and 270. Many of the sarcophagi look like tiny temples or residential buildings; don't miss the Sidamara Sarcophagus from Konya (3rd century AD) with its interlocking horses' legs and playful cherubs. The last room in this section contains Roman floor mosaics and examples of Anatolian architecture from antiquity.

The last of the complex's museum buildings is this handsome pavilion, constructed in 1472 by order of Mehmet the Conqueror. The portico, which has 14 marble columns, was constructed during the reign of Sultan Abdül Hamit I (1774–89) after the original burned down in 1737.

On display here are Seljuk, Anatolian and Ottoman tiles and ceramics dating from the end of the 12th century to the beginning of the 20th century. The collection includes İznik tiles from the period between the mid-14th and 17th centuries when that city produced the finest coloured tiles in the world. When you enter the central room you can't miss the stunning mihrab from the İbrahim Bey İmâret in Karaman, built in 1432.

A joint ticket to Topkapı Palace (but not the Harem), Aya Sofya and the Archaeology Museums costs ₺135.