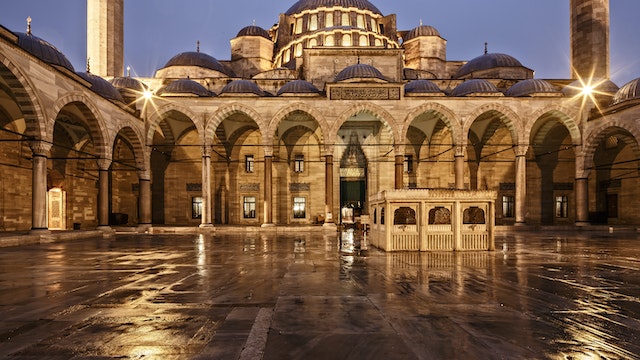 The Süleymaniye crowns one of İstanbul's seven hills and dominates the Golden Horn, providing a landmark for the entire city. Though it's not the largest of the Ottoman mosques, it is certainly one of the grandest and most beautiful. It's also unusual in that many of its original külliye (mosque complex) buildings have been retained and sympathetically adapted for reuse.

Commissioned by Süleyman I, known as 'the Magnificent', the Süleymaniye was the fourth imperial mosque built in İstanbul; the mosque's four minarets with their 10 beautiful şerefes (balconies) are said to represent the fact that Süleyman was the fourth of the Osmanlı sultans to rule the city and the 10th sultan after the establishment of the empire. The mosque and its surrounding buildings were designed by Mimar Sinan, the most famous and talented of all imperial architects. Construction occurred between 1550 and 1557.

Inside, the building is breathtaking in its size and pleasing in its simplicity. Sinan incorporated the four buttresses into the walls of the building – the result is wonderfully 'transparent' (ie open and airy) and highly reminiscent of Aya Sofya, especially as the dome is nearly as large as the one that crowns the Byzantine basilica.

Süleyman specified that his mosque complex should have a külliye with imaret (soup kitchen), medrese (seminary), hamam, darüşşifa (hospital), tabhane (inn for travelling dervishes) etc. The imaret and tabhane are on the northwestern edge of the mosque and the main entrance to the mosque is accessed from Professor Sıddık Sami Onar Caddesi, formerly known as Tiryaki Çarşışı (Market of the Addicts). The buildings here once housed three medreses and a primary school; they're now home to the Süleymaniye Library and a raft of popular streetside fasulye (bean) restaurants that used to be teahouses selling opium (hence the street's former name). The darüşşifa is on the corner of Professor Sıddık Sami Onar Caddesi and Şifahane Sokak.

Sinan's türbe (tomb) is just outside the mosque's walled garden, next to a disused medrese (seminary) building.

The still-functioning Süleymaniye Hamamı is on the eastern side of the mosque.

To the right (southeast) of the mosque's main entrance is the cemetery, home to the octagonal tombs of Süleyman and his wife Haseki Hürrem Sultan (Roxelana). The tile work surrounding the entrances to both is superb and the ivory-inlaid panels in Süleyman's tomb are lovely.

The streets surrounding the mosque are home to what may well be the most extensive concentration of Ottoman timber houses on the historical peninsula, many of which are currently being restored as part of an urban regeneration project.