in The Bosphorus Suburbs 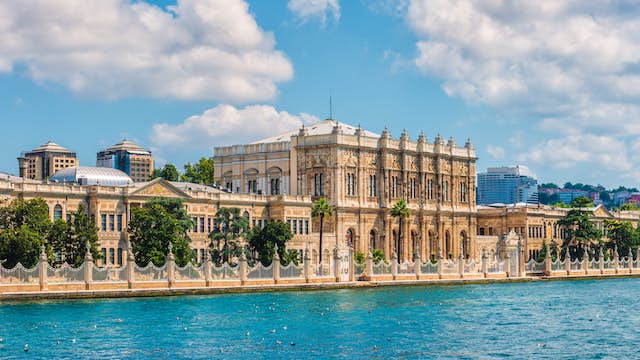 These days it’s fashionable for architects and critics influenced by the less-is-more aesthetic of Bauhaus masters to sneer at buildings such as Dolmabahçe. However, the crowds that throng to this imperial palace with its neoclassical exterior and over-the-top interior clearly don’t share that disdain, flocking here to tour its Selamlık (Ceremonial Quarters) and Harem. Both are visited on a self-guided audio tour (included in ticket cost). Of the two, the Selamlık is the more interesting.

More rather than less was certainly the philosophy of Sultan Abdül Mecit I (r 1839–61), who decided to move his imperial court from Topkapı to a lavish new palace on the shores of the Bosphorus. For a site he chose the dolma bahçe (filled-in garden) where his predecessors, Sultans Ahmet I and Osman II, had filled in a little cove in order to create a royal park complete with wooden pleasure kiosks and pavilions.

Abdül Mecit commissioned imperial architects Nikoğos and Garabed Balyan to construct an Ottoman-European palace that would impress everyone who set eyes on it. Traditional Ottoman palace architecture was eschewed – there are no pavilions here, and the palace turns its back to the splendid view rather than celebrating it. The designer of the Paris Opera was brought in to do the interiors, which perhaps explains their exaggerated theatricality – the huge Hereke carpets, crystal staircase and chandeliers in the Selamlık are particularly resplendent. Construction was completed in 1854, and the sultan and his family moved in two years later. Though it had the wow factor in spades, Abdül Mecit’s extravagant project precipitated the empire’s bankruptcy and signalled the beginning of the end for the Osmanlı dynasty. During the early years of the republic, Atatürk used the palace as his İstanbul base. He died here on 10 November 1938.

The tourist entrance to the palace grounds is the ornate imperial gate, with an equally ornate clock tower just inside. Sarkis Balyan designed the tower between 1890 and 1895 for Sultan Abdül Hamit II (r 1876–1909). There is an outdoor cafe near here with premium Bosphorus views.

Set in well-tended gardens, the palace is divided into three sections: the Selamlık, Harem and Veliaht Dairesi (Apartments of the Crown Prince). In the Selamlık, a self-guided audio tour takes visitors through huge, ornately furnished reception halls and past a series of more-intimate salons. There are also two exhibition halls here where precious objects from the palace collections are displayed. The Harem is arranged as it was when the sultans and their families lived here, and also has a room dedicated to Atatürk. The Veliaht Dairesi is now home to the National Palaces Painting Museum, which is visited on a separate ticket. Buildings in the palace grounds include a Clock Museum filled with 19th-century clocks; entry here is included in the palace tickets.

Note that visitor numbers in the palace are limited to 3000 per day and this ceiling is often reached on weekends and holidays – come midweek if possible, and even then be prepared to queue (often for long periods and in full sun). Also note that admission here is not covered by the Museum Pass İstanbul.

Just outside the gate, the Dolmabahċe Mosque (Dolmabahçe Camii) on Muallim Naci Caddesi was designed by Nikoğos Balyan and completed in 1853.