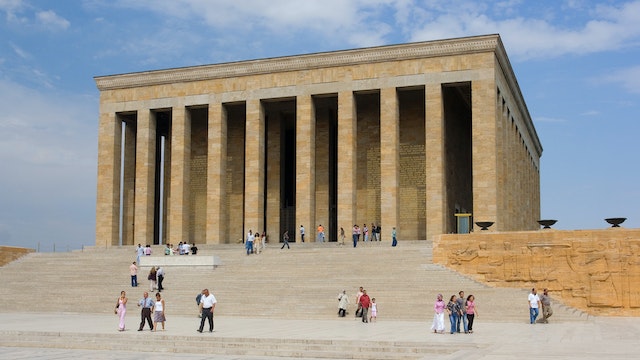 The monumental mausoleum of Mustafa Kemal Atatürk (1881–1938), the founder of modern Turkey, sits high above the city with its abundance of marble and air of veneration. The tomb itself actually makes up only a small part of this complex, which consists of museums and a ceremonial courtyard. For many Turks a visit is virtually a pilgrimage, and it's not unusual to see people visibly moved. Allow at least two hours in order to visit the whole site.

The main entrance to the complex is via the Lion Road, a 262m walkway lined with 24 lion statues – Hittite symbols of power used to represent the strength of the Turkish nation. The path leads to a massive courtyard, framed by colonnaded walkways, with steps leading up to the huge tomb on the left.

To the right of the tomb, the extensive museum displays Atatürk memorabilia, personal effects, gifts from famous admirers, and re-creations of his childhood home and school. Just as revealing as all the rich artefacts are his simple rowing machine and huge multilingual library, which includes tomes he wrote.

Downstairs, extensive exhibits about the War of Independence and the formation of the republic move from battlefield murals with sound effects to over-detailed explanations of post-1923 reforms. At the end, a gift shop sells Atatürk items of all shapes and sizes.

As you approach the tomb itself, look left and right at the gilded inscriptions, which are quotations from Atatürk's speech celebrating the republic's 10th anniversary in 1932. Remove your hat as you enter, and bend your neck to view the ceiling of the lofty hall, lined in marble and sparingly decorated with 15th- and 16th-century Ottoman mosaics. At the northern end stands an immense marble cenotaph, cut from a single piece of stone weighing 40 tonnes. The actual tomb is in a chamber beneath it.

The memorial straddles a hill in a park about 2km west of Kızılay and 1.2km south of Anadolu metro station (the closest Ankaray-line station to the entrance). A free shuttle regularly zips up and down the hill from the entrance; alternatively, it's a pleasant walk to the mausoleum.