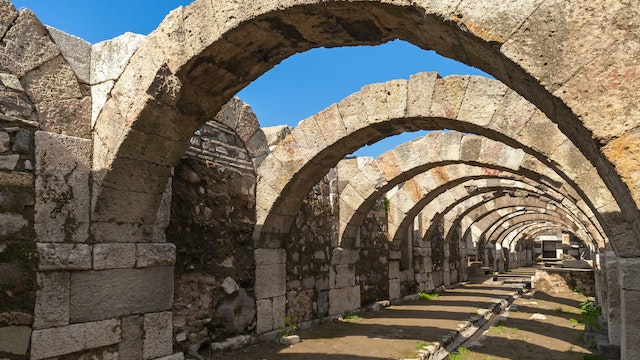 Dating from the end of the 4th century BC, Smyrna's ancient agora was ruined in an earthquake in AD 178 but soon rebuilt by order of the Roman emperor Marcus Aurelius. The reconstructed Corinthian colonnade and Faustina Gate are eye-catching, but the vaulted chambers and cisterns in the basements of the two stoas (basilicas) are even more interesting, giving visitors a good idea of how this rectangular-shaped, multilevel marketplace would have looked in its heyday. Archaeological investigations are still underway.

A Muslim cemetery was later built on the agora and many of the old tombstones remain on site. The ticket office is located on the south side, just off Gazi Osmanpaşa Bulvarı.