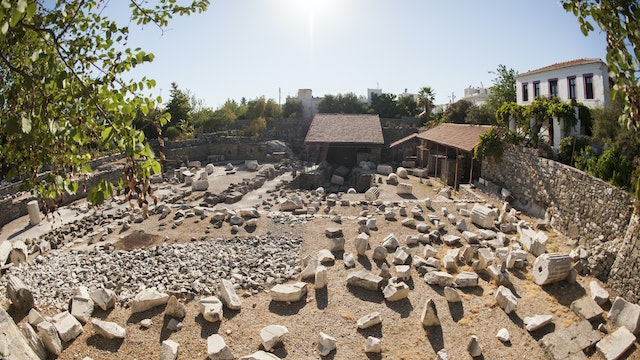 One of the Seven Wonders of the Ancient World, the Mausoleum (originally 44.8m high) was the greatest achievement of Carian King Mausolus (r 376–353 BC), who moved his capital from Mylasa to Halicarnassus. Today very little remains: pre-Mausolean stairways and tombs; the narrow entry to Mausolus' tomb chamber; original drainage systems; precinct wall bits; and some large fluted marble column drums.

Before his death, the king planned his own tomb, to be designed by Pytheos, the architect of Priene's Temple of Athena. When he died, his wife (and sister), Artemisia, oversaw the completion of the enormous, white-marble colonnaded tomb topped by a 24-step pyramid and a quadriga, a four-horse chariot carrying Mausolus. In the late 15th century, the Knights Hospitaller found the mausoleum in ruins, perhaps destroyed by an earthquake, and between 1494 and 1522, almost all of it was reused as building blocks for the castle or burned for the lime content to strengthen the walls. Luckily, the more impressive ancient friezes were incorporated into the castle walls, while original statues of Mausolus and Artemisia ended up in the British Museum.

The site has relaxing gardens, with excavations to the west and a covered arcade to the east – the latter contains a copy of the famous frieze now in the British Museum. Four original fragments displayed were discovered more recently. Models, drawings and documents indicate the grand dimensions of the original mausoleum. A scale model of Mausolus' Halicarnassus is also on display.