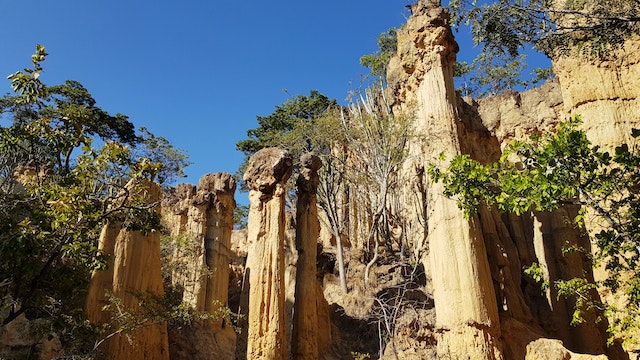 Here, in the late 1950s, amid a dramatic landscape of eroded sandstone pillars, archaeologists unearthed one of the most significant Stone Age finds ever identified. Tools found at the site – hammerstones, axeheads, flints and scrapers – are estimated to be between 60,000 and 100,000 years old. There’s a museum with small, well-captioned displays highlighting some of the discoveries. Isimila is signposted off the Mbeya road to the left, about 21km southwest of Iringa.

The main pillar area is accessed via a walk down into a steep valley (about one hour round-trip), for which you’ll need a guide. Visits are best in the morning or late afternoon, when the sun is not at its zenith. There’s also a covered picnic area (bring your own food). Unexpectedly, the dusty museum has an excellent small shop selling colourful men's shirts and a few other items.

With a bit of endurance for heat and traffic, the site is straightforward to reach by bicycle from Iringa. Via public transport, take an Ifunda or Mafinga dalla-dalla from the Iringa town bus station and ask the driver to drop you at the Isimila junction (Tsh1500), from where it’s a 15-minute walk to the site. Taxis charge from about Tsh25,000 for the return trip.

A possible detour on bicycle or with private vehicle is to nearby Tosamaganga, a pretty hilltop mission station established by Italian missionaries in the early 20th century. It’s reached via the unsignposted ‘Njia Panda ya Tosamaganga’ turn-off from the main road, 4km northeast of the Kalenga turn-off. Follow the wide, unpaved road for about 5km, first past cornfields and then along a eucalyptus-lined lane to the red-tile roofs and imposing church of the mission.