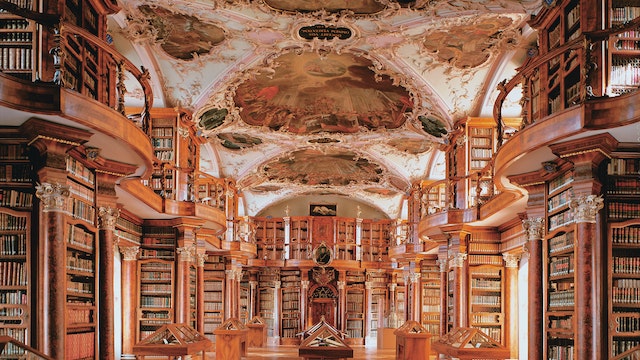 If the greatest masterpieces on earth are wrought for the glory of God, St Gallen’s Stiftsbibliothek (Abbey Library), is like a living prayer. Religious or not, you can’t help but look up to the heavens and fall silent as you step across its creaking wood floor, breathe in the scent of 1000 years of parchment, ink, patience and piety, and cast a careful eye across its stucco-encrusted ceiling, biblical frescoes, playful putti (cherub-like figures), magnificent globe and shelves lined with 170,000 beautiful leather-bound books. Some of the world’s most precious and elaborate medieval manuscripts are hidden here, occasionally dusted off for exhibitions for all to admire.

Once the beating heart of one of Europe’s finest Benedictine monasteries, the library gave St Gallen a solid foot up the celestial ladder in the Middle Ages. Today, this wondrous space forms the centerpiece of the Unesco World Heritage Stiftsbezirk (Abbey District). If you make the pilgrimage to just one abbey in Switzerland, this really should be it.

Local lore has it that St Gallen began with a bush, a bear and an Irish monk who should have watched where he was going. In AD 612, as the tale goes, itinerant monk St Gall (Gallus), one of the twelve companions of Saint Columbanus, was on a mission from Ireland to the continent. He fell into a briar (bush) and considered the stumble a calling from God. After a fortuitous encounter with a bear, in which he persuaded it to bring him a log, take some bread in return and leave him in peace, he used the log to begin building the simple hermitage that would one day evolve into St Gallen’s cathedral.

Whether or not you believe the bit about the briar and the bear, St Gall was instrumental in sewing the seeds of what would blossom into one of the world’s greatest Benedictine abbeys, founded by Abbot Otmar in 747 AD. The city of St Gallen sprang up around the abbey and developed into one of Europe’s most important intellectual and religious centres.

In the Middle Ages, monks flocked here from afar to pray, read, study scriptures and devote years to copying and illustrating manuscripts; a painstaking, solitary act that required a patient hand and a peaceful heart. Arts, letters and sciences flourished here and the library grew to impressive proportions, with its manuscripts inspiring accomplished artists and leading literary scholars: from Notker Balbulus to Ekkehart IV.

The abbey survived the threats and fires that ravaged the town over the centuries, and the turbulent times of the Reformation. Based on plans by star architect of the baroque age, Peter Thumb of Vorarlberg, the new abbey was built in the mid 18th century, just before the abbey lands were secularised and the abbey itself dissolved in 1805. The former abbey church became a cathedral in 1848, and the whole site, including the Stiftsbibliothek, was granted Unesco World Heritage status in 1983.

A master of the exuberant rococo style, Peter Thumb of Vorarlberg didn’t do things by halves. Completed just before his death in 1767, the library was his parting gift to the world and magnum opus: a swirling confection of curling stucco and frescoes depicting the early church councils. The plump putti (cherub-like figures) in the window niches embody professions – poet and doctor, botanist and carpenter, musician and painter, astronomer and architect.

A balcony unfurls gracefully along the upper level, with 34 windows allowing a painterly light to stream in even on overcast days. No expense was spared on the materials, with bookshelves and bookcases carved out of exquisite walnut and cherry wood. Above the entrance, a pair of gilded cherubs hold up a sign saying psyché iatreio, the Greek for “sanctuary of the soul” or “soul pharmacy”.

Only 30,000 of the total collection of 170,000 volumes are in the library at any one time, arranged into special exhibitions. Among these are 1650 incunabula (books printed before 1501). Of the library's 2100 precious manuscripts – some of which are true works of art and remarkably well preserved – just a handful are on display. The oldest manuscript, dating to 760, was penned by the monk Winithar, who complained about not having sufficient parchment.

Among its other literary treasures are the 9th-century Cod Sang 555, the earliest portrait of St Columba, a version of The Rule of St Benedict, the cornerstone of medieval monastic life, and Manuscript B of the Nibelungenlied (The Song of the Nibelungs), an epic poem written around 1200.

Igniting the adventurous spirit in any born traveler, the library’s earth and celestial globe is a beauty, more than two metres high, replete with naturalistic detail and still incomplete as some countries were yet to be discovered. The 16th-century original was stolen more than 400 years ago, so what you see now is a very convincing replica.

For more insight into St Gall and his life and work, delve into the vaulted cellar. This houses the Lapidarium, which showcases a collection of Carolingian, Ottonian and Gothic sculpture from the former church on the site. There's also some interesting background, albeit mostly in German, about the art of illustration. The standout is the late 9th-century Evangelium Longum, an illuminated manuscript with an intricately carved ivory cover bearing the hallmark of the monk and artist Tuotilo.

Hailing from the Deir el-Bahri Temple Complex, Shepenese, the library’s ancient Egyptian mummy, dates to 700 BC and was given as a gift to the mayor of St Gallen in 1820, together with two wooden sarcophagi. Shepenese was the daughter of a priest and lived at the start of the Saite Dynasty (672 to 525 BC).

Taking the stylistic leap from baroque to classicism, St Gallen's twin-towered, mid-18th-century cathedral is only slightly less ornate than the world-famous library nearby. A riot of mint-green stucco and rose marble, the cathedral dances with dark, stormy frescos and cherubs and saints gazing down from heavenly clouds. The cupola (ceiling dome) shows a vision of paradise with the Holy Trinity at the centre. To experience the cathedral at its uplifting best, visit during one of the Dommusik concerts.

While you’re in St Gallen, factor in time for a stroll around the Altstadt (Old Town), where many houses are embellished with Erker (oriel bay windows), especially around Gallusplatz, Spisergasse, Schmiedgasse and Kugelgasse. Locals have totted them all up and reckon there are 111. Some bear the most extraordinary timber sculptures – a reflection of the wealth of their one-time owners, mostly textile barons.

Multilingual audio guides are available at the abbey library and exhibition space counters, as are felt slippers, which are obligatory to protect the parquet floor. Photography is strictly forbidden (even without flash). Included in the cost of the abbey ticket, public 45-minute guided tours in German depart at 2pm daily; no booking is required.