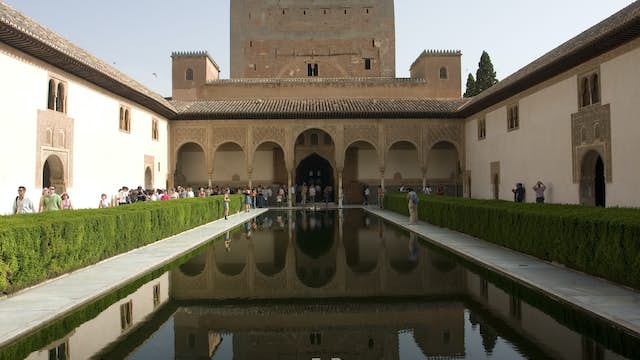 This is the stunning centrepiece of the Alhambra, the most brilliant Islamic building in Europe, with perfectly proportioned rooms and courtyards, intricately moulded stucco walls, beautiful tiling, fine carved wooden ceilings and elaborate stalactite-like muqarnas vaulting, all worked in mesmerising, symbolic, geometrical patterns. Arabic inscriptions proliferate in the stucco work.

Admission to the palacios (included in the Alhambra ticket) is strictly controlled. When you buy your ticket, you'll be given a time to enter. Once inside, you can stay as long as you like.

The palace was originally divided into three main areas: the Mexuar, the administrative and public part of the complex; the Palacio Comares, the emir’s official residence; and the Palacio de los Leones, his private quarters.

Entrance is through the Mexuar, a 14th-century room used as a ministerial council chamber and antechamber for those awaiting audiences with the emir. The public would have gone no further.

From the Mexuar you pass into the Patio del Cuarto Dorado, a courtyard where the emirs gave audiences, with the Cuarto Dorado (Golden Room) on the left. Opposite the Cuarto Dorado is the entrance to the Palacio de Comares through a beautiful facade of glazed tiles, stucco and carved wood.

Built for Emir Yusuf I, the Palacio de Comares served as his official residence. It's set around the lovely Patio de los Arrayanes (Patio of the Myrtles) with its rectangular pool. The southern end of the patio is overshadowed by the walls of the Palacio de Carlos V. Inside the northern Torre de Comares (Comares Tower), the Sala de la Barca (Hall of the Blessing) leads into the Salón de los Embajadores (Chamber of the Ambassadors), where the emirs would have conducted negotiations with Christian emissaries. This room's marvellous domed marquetry ceiling contains more than 8000 cedar pieces in a pattern of stars representing the seven heavens of Islam.

The Patio de los Arrayanes leads into the Palacio de los Leones (Palace of the Lions), built in the second half of the 14th century under Muhammad V. The palace rooms surround the famous Patio de los Leones (Lion Courtyard), with its marble fountain channelling water through the mouths of 12 marble lions. The courtyard layout, using the proportions of the golden ratio, demonstrates the complexity of Islamic geometric design – the 124 slender columns that support the ornamented pavilions are placed in such a way that they are symmetrical on numerous axes.

Of the four halls around the patio, the southern Sala de los Abencerrajes is the most spectacular. Boasting a mesmerising octagonal stalactite ceiling, this is the legendary site of the murders of the noble Abencerraj family, whose leader, the story goes, dared to dally with Zoraya, Abu al-Hasan's favourite concubine. The rusty stains in the fountain are said to be the victims’ indelible blood. At the eastern end of the patio is the Sala de los Reyes (Hall of the Kings) with a leather-lined ceiling painted by 14th-century Christian artists. The name comes from the painting on the central alcove, thought to depict 10 Nasrid emirs. On the northern side of the patio is the richly decorated Sala de Dos Hermanas (Hall of Two Sisters), probably named after the slabs of white marble flanking its fountain. It features a fantastic muqarnas dome with a central star and 5000 tiny cells, reminiscent of the constellations. This may have been the room of the emir's favourite paramour. At its far end, the tile-trimmed Mirador de Daraxa (Daraxa lookout) was a lovely place for palace denizens to look onto the garden below.

From the Sala de Dos Hermanas a passage leads through the Estancias del Emperador (Emperor's Chambers), built for Carlos I in the 1520s, and later used by the American author Washington Irving. From here, descend to the Patio de la Reja (Patio of the Grille) and Patio de Lindaraja before emerging into the Jardines del Partal, an area of terraced gardens. Leave the Partal gardens by a gate facing the Palacio de Carlos V, or continue along a path to the Generalife.

The Palacios Nazaríes are also open for night visits.