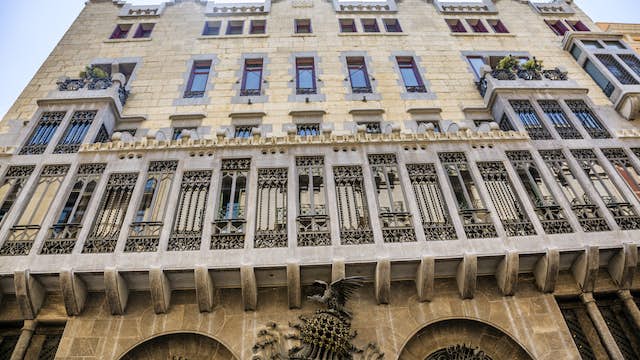 Built off La Rambla in the late 1880s for Gaudí's wealthy patron the industrialist Eusebi Güell, the Palau Güell is a magnificent example of the early days of the architect's fevered architectural imagination. This extraordinary neo-Gothic mansion (one of few major buildings of that era raised in Ciutat Vella) gives an insight into its maker’s prodigious genius, and, though a little sombre compared with some of his later whims, it's a characteristic riot of styles (Gothic, Islamic, art nouveau) and materials.

After the civil war the police occupied the Palau and tortured political prisoners in the basement. The building was then abandoned, leading to its long-term disrepair. It was finally reopened in 2012 after several years of refurbishment.

Visits begin on the ground floor, in what was once the coach house, and from there head down to the basement, with its squat mushroom-shaped brick pillars; this is where the horses were stabled. Back upstairs you can admire the elaborate wrought iron of the main doors from the splendid vestibule, and the grand staircase lined with sandstone columns. Up on the 1st floor is the main hall; central to the structure is the magnificent music room with its rebuilt organ that is played during opening hours. The hall is a parabolic pyramid – each wall an arch stretching up three floors and coming together to form a dome. Off the music room is the Sala de Visites, with an exquisite artesonado (ceiling of interlaced beams with decorative insertions).

Above this main floor are the family rooms, some of which are labyrinthine and dotted with piercings of light, wrought iron arabesques or grand, stained-glass windows. The roof is a tumult of tiled mosaics and fanciful design in the building’s chimney pots. The audio guide is worth a listen not only for the detailed description of the architecture, but for the pieces of music and its photographic illustrations of the Güell family's life.

Picasso – who, incidentally, hated Gaudí’s work – began his Blue Period in 1902 in a studio across the street at Carrer Nou de la Rambla 10. Begging to differ with Senyor Picasso, Unesco has declared the Palau, together with Gaudí’s other main works, a World Heritage site.