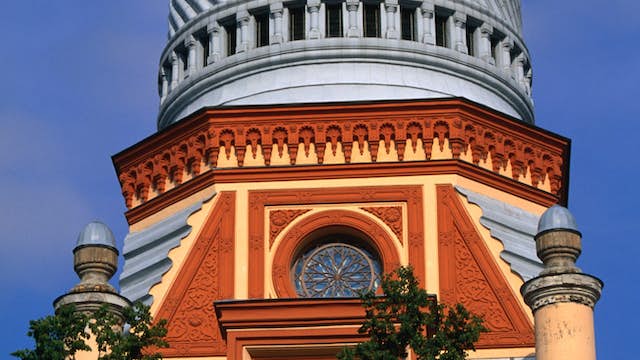 Designed by Vasily Stasov, the striking Grand Choral Synagogue opened in 1893 to provide a central place of worship for St Petersburg’s growing Jewish community. Its lavishness (particularly notable in the 47m-high cupola and the decorative wedding chapel) indicates the pivotal role that Jews played in imperial St Petersburg. The synagogue was fully revamped in 2003. Visitors are welcome except on the Sabbath and other holy days. Men and married women should cover their heads upon entering.

Also on-site are the Small Synagogue (generally opened for guided tours only), the Jewish restaurant Le'chaim and a Kosher Shop. In summer, the synagogue also hosts performances with a Jewish cantor and other musicians performing chaaznut and klezmer music. The synagogue organises English-language tours of the building, as well as Jewish heritage tours of St Petersburg, all of which need to be organised in advance – see the website.