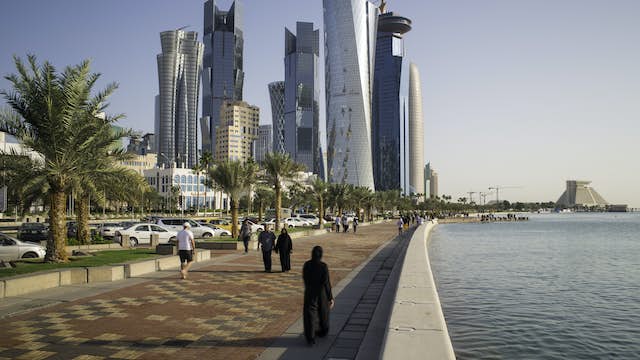 Doha makes full use of its attractive waterfront promenade, which stretches 7km along Doha Bay and was carefully constructed from landfill to make a pleasing crescent. The best views are from the water's edge close to the Museum of Islamic Art, with dhows (traditional cargo boats) in the foreground and the skyscrapers of West Bay across the water. The best time to come is late afternoon on Friday, when families of all nationalities throng here.

The 5km walk from the Museum of Islamic Art to the Sheraton on West Bay is a wonderful late-afternoon stroll in a city not known for its pedestrian-friendly streets. Allow a good hour and a half.

At the southern end of the Corniche is the National Museum of Qatar, a beautiful architectural feat shaped like a desert rose. The collection of whitewashed traditional-style buildings on the far right belongs to the exquisite five-star Sharq Village & Spa. A must-stop down this end is the traditional Halul Coffeehouse, a local-style cafe that has somehow escaped the modernisation of the area.

Further north is the ‘sea’ zone of the Corniche, with Doha’s busy port marked by the monumental anchors on the shore and the cream-coloured flour mills at the end of the jetty. Along the Corniche north of the Museum of Islamic Art, the entrance to the dhow harbour is marked by the famous pearl monument, a popular spot for photos. Enjoy the spectacular view of West Bay from the end of a jetty full of lobster pots and lazy dhows, moored between night-time fishing trips.