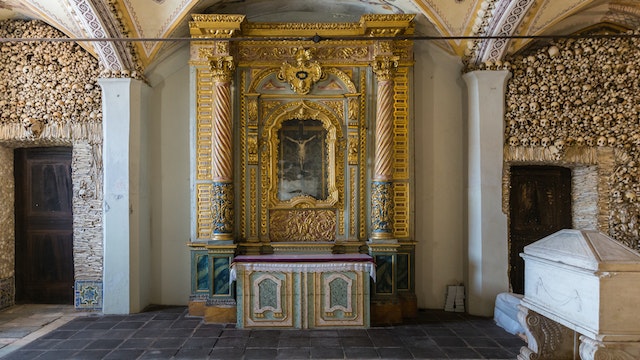 One of Évora’s most popular sights is also one of its most chilling. The walls and columns of this mesmerising memento mori (reminder of death) are lined with the bones and skulls of some 5000 people. This was the solution found by three 17th-century Franciscan monks for the overflowing graveyards of churches and monasteries.

There’s black humour to the way the bones and skulls have been arranged in patterns, and the whole effect is strangely beautiful, though probably not one you’d be inspired to re-create at home. An inscription over the entrance translates as ‘We bones that are here await yours’. Above the chapel, a museum contains works of religious art and a terrace with views over town. The former Chapter House (which currently contains the ticket counter for the chapel) contains a fine collection of azulejos (hand-painted tiles).