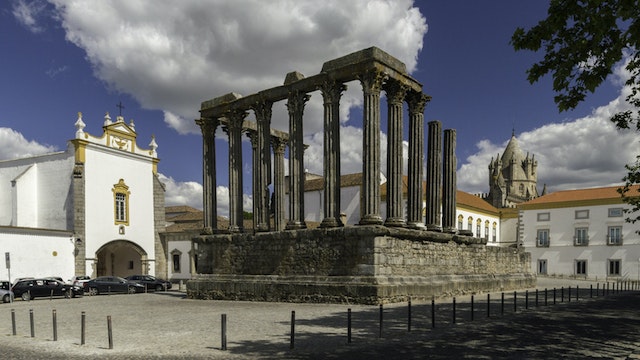 Once part of the Roman Forum, the remains of this temple, dating from the 2nd or early 3rd century AD, are a heady slice of drama right in town. It's among the best-preserved Roman monuments in Portugal, and probably on the Iberian Peninsula. Though it's commonly referred to as the Temple of Diana, there's no consensus about the deity to which it was dedicated, and some archaeologists believe it may have been dedicated to Julius Caesar.

How did these 14 Corinthian columns, capped with Estremoz marble, manage to survive in such good shape for some 18 centuries? The temple was apparently walled up in the Middle Ages to form a small fortress, and then used as the town slaughterhouse. It was uncovered late in the 19th century. These unwitting preservation techniques worked, as the imposing colonnade is stunningly complete.