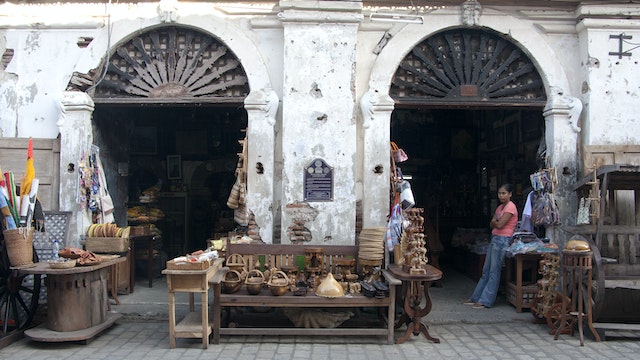 The Mestizo District, or Kasanglayan ('where the Chinese live'), is a grid of streets hemmed in between Plaza Burgos and Liberation Blvd and bisected by the beautifully preserved Crisologo St. You can wander in a daze among ancestral homes and colonial-era architecture. The mansions here are beautiful and architecturally unique, marrying two great aesthetic styles: Chinese and Spanish.

The latter were once Vigan’s colonial masters; the former were merchants who settled, intermarried and, by the 19th century, became the city’s elite. In fact, Spanish and Chinese are themselves limiting terms when it comes to describing Vigan architecture. Spain itself has either influenced or been influenced by Mexico, the Caribbean and North Africa, and these regions also make their presence known in the form of airy verandahs, leafy inner courtyards and wrought-iron balconies. At the same time, Asia makes an appearance with dark wooden accents, polished floors, sliding capiz-shell windows and ventanillas (ventilated walls).

In most mansions, the ground floor has stone walls and is strictly for storage and/or work, while the wooden 1st floor, with its large, airy sala (living room), is for living. The capiz-shell windows are as tall as doors, while the wide window sills are good spots for a siesta. The capiz is a flat bivalve found in the coastal waters of the Philippines. It came into fashion in the 19th century because it was cheaper than glass and sturdy enough to withstand typhoon winds and rain. Light shines through capiz in a particular way that is almost impossibly romantic.

While a couple of mansions have been converted into B&Bs or museums, most are private homes. Two houses to look out for are the Quema House, with its original furnishings and decor, and the Syquia Mansion on Quirino Blvd, the former holiday home of Vigan native Elpidio Quirino, the Philippines’ sixth president, who was born in the nearby provincial jail. This is one of the best-preserved historical homes, and a good place to get a sense of the traditional interior of a Chinese–Spanish mansion at the end of the 19th century.