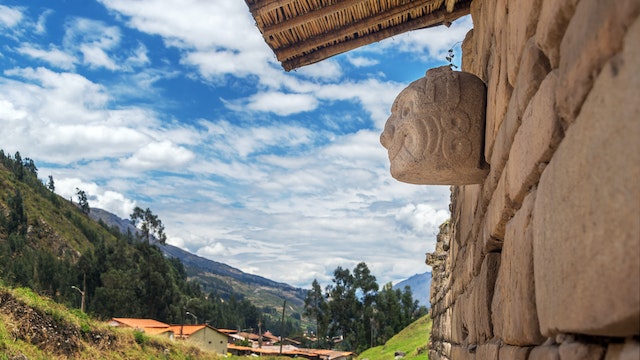 In most people's minds, Chavín is less a town and more a set of ruins – not any old ruins, but the erstwhile ceremonial center of one of Peru's most sophisticated early civilizations, and a Unesco World Heritage Site to boot.

Most visitors zip by on a day trip, ignoring the diminutive colonial town with its whimsical plaza and somnolent streets that sits somewhere on the charm-o-meter between gorgeous Chacas and slightly less gorgeous Huari. If you decide to overnight here, you can visit the impressive archaeological site in the early morning and have it all to yourself.

Things to do at Chavín de Huántar

From Chavín you can hike for a few hours into a lofty valley, in the direction of Olleros, to a high pass with stirring views of Huantsán (6395m) – the highest mountain in the southern Cordillera Blanca. Longer hiking trips with mules and guides can be organized through Cafetería Renato.

After admiring the Chavin ruins from ground (and underground) level, you can climb up to this trio of crosses grafted onto a crag high above town for a full view of the archaeological site. Walk four blocks north of Plaza de Armas on Jirón Huaca, turn left, and take the stony, well-marked path uphill. It’s around 3km round-trip.

The sulfur Quercos thermal baths, a 30-minute walk south of town, house numerous windowless bath cubicles that fail to take advantage of their riverside setting. Still, the waters work wonders on post-hike muscles. Steps lead down from the main road to modest facilities by the river. A taxi from town costs S10.

The outstanding Museo Nacional de Chavín, funded jointly by the Peruvian and Japanese governments, houses most of the intricate tenon heads carved with horror-stricken expressions from Chavín de Huántar, as well as the magnificent Tello Obelisk, another stone object of worship with low relief carvings of a caiman and other fierce animals. The obelisk had been housed in a Lima museum since the 1945 earthquake that destroyed much of the original museum, and was only returned to Chavín in 2008. The museum is located around 2km from the ruins on the north side of town – an easy 25-minute walk

It's best to get an early start and make the most of daytime activities while you can. Chavín goes to bed early; this is no party town. Stifle your late-night pisco-sinking urges until you get back to Huaraz.

Where to stay and eat

There are several lodging options and eateries in Chavín, even if it isn't the most bustling part of Peru.

Finca Renato is perched on a hillside overlooking town, this 6-hectare farm has icy showers but offers fantastic views over rooftops to the ruins. There's a basic refugio with dorm beds and cooking facilities, plus campsites. Make bookings and pick up directions at Cafeteria Renato before venturing up.

Hostal Chavín Turístico is a go-to, family-run option for the few travelers who stay overnight in Chavín has well-appointed rooms with cute bedspreads, large bathrooms and – perhaps most refreshingly – no chipped paint or rusty pipes. The rooms are one block away from the same-name restaurant where you check in. Uploading your Instagrams will have to wait, however. There's no wi-fi.

Hostal Inca's street profile is alluring enough – a whitewashed colonial building in Chavín's main square with some flowery arrangements in the courtyard. However, when you get down to the nitty-gritty the Inca is overdue a refurb, with dusty rooms, slightly lumpy beds and no hot water. Breakfast is S12 extra.

Churning out sophisticated dishes that outpunch its location’s weight class, Buongiorno is a pleasant surprise in a cordial garden setting. The lomo a la pimienta, a Peruvian fave of grilled steak in wine, cream and cracked-pepper sauce (S35), is three-star Lima quality and the menu also has some strong Italian inflections courtesy of the owner who spent several years abroad. The cooks at  often dart out to the extensive gardens and grab some fresh organic herbs – a nice touch. It’s 50m across the bridge from the entrance to the ruins. The restaurant mainly focuses on the busy dinner trade (when it fills with tour groups). If you're planning on dinner, check ahead as closing times are flexible.

For simple international breakfasts alongside homemade yogurt, cheese and manjar blanco (homemade caramel spread), head to Cafeteria Renato, a rustic cafe done out like a cowboy corral with saddles slung over walls and maps decorating the walls. The owners also organize horseback riding and hiking trips in the area.

A solid option, especially for trucha al ajo (garlic trout) and trout sudado (in sauce), Chavín Turístico has rickety tables around a tiny courtyard and a chalkboard of traditional dishes. The food doesn't lack flavor, and local archaeologists say it’s the most reliable choice in town. It's affiliated with Hostal Chavín Turístico.

How to get to Chavín

The paved road across the Cordillera Blanca to Chavín passes the Laguna Querococha at 3980m from where there are views of the peaks of Pucaraju (5322m) and Yanamarey (5237m). The road continues through the Kahuish Tunnel (4516m above sea level), which cuts through the Kahuish Pass. As you exit the tunnel and descend toward Chavín, look out for the massive statue of Christ blessing your journey. It was built by Italian missionaries.

In Chavín, most transportation leaves from the ugly new bus station several blocks south of the plaza. All local buses pick up and drop off where the highway bends at the plaza. Olguita Tours has regular departures to Huaraz (S12, 2½ hours, six daily) as well as Huari (S5, two hours, four daily) to the north. Transportes Sandoval offers similar services. Combis/colectivos head to Huaraz (S20/25, 2½ hours) from the oddly named Plaza Chupa, a block north of the quaint Plaza de Armas.

Both Movil Tours and Turismo Rosario have 7:40pm departures to Lima (S55 to S75, nine hours). The former is far superior, with comfortable and reliable coaches equipped with reclining seats.

To continue north along the east side of the Cordillera Blanca, most of the buses originating in Huaraz continue to Huari (S5, two hours). Colectivos leave frequently from near the Plaza de Armas to San Marcos (S2, 20 minutes) from where you can catch colectivos to Huari (S5, 45 minutes). Other than these buses, there is no other public transportation beyond Huari.

Hikers can walk to Chavín from Olleros in the Callejón de Hualyas in about three days; it’s an uncrowded trek.

The history of Chavín de Huántar

Named after the site at Chavín de Huántar, this is considered one of the oldest major cultural periods in Peru, strutting its stuff on the pre-Inca stage from 1200 BC to 500 BC. The Chavín and its contemporaries wielded their influence with great success, particularly between the formative years of 800 BC to 500 BC when they excelled in the agricultural production of potatoes and other highland crops, animal husbandry, ceramic and metal production, and the engineering of buildings and canals. Chavín archaeologists have formerly referred to this time of political ascendance as the Chavín Horizon, though Early Horizon or Late Formative is also used.

The principal Chavín deity was feline (jaguar or puma), although lesser condor, eagle and snake deities were also worshipped. Representations of these deities are highly stylized and cover many Chavín-period sites and many extraordinary objects, such the Tello Obelisk in the Museo Nacional de Chavín; the Lanzón, often referred to as the Smiling God, which stands in mystical glory in the tunnels underneath the Chavín site; and the Raimondi Stone at the Museo Nacional de Antropología, Arqueología e Historia del Perú in Lima.

The Raimondi Stone (which is currently considered too fragile to move to Chavín) has carvings of a human figure, sometimes called the Staff God, with a jaguar face and large staffs in each hand – an image that has shown up at archaeological sites along the northern and southern coasts of Peru and which suggests the long reach of Chavín interactions. The images on all of these massive stone pillars are believed to indicate a belief in a tripartite universe consisting of the heavens, earth and a netherworld, or, as an alternative theory goes, a cosmos consisting of air, earth and water, though these remain elaborate guesses – archaeologists at the site have seen no good evidence to support any of these theories.

As a major ceremonial center, the most powerful players in Chavín were its priests, who impressed the upper ranks of society with complex rituals that were occasionally terrifying. One theory says priests relied on sophisticated observation and understanding of seasonal changes, rain and drought cycles, and the movement of the sun, moon, and stars to create calendars that helped the Chavín reign as agriculturalists, though there is as yet no evidence that calendars were created. Others believe that Chavín leaders were getting to the point of being free of system-serving, and heading for authority based on belief rather than for serving an agricultural purpose. Some archaeologists have argued that women also served as priests and played a powerful role during the Chavín period. Chavín, it seems, remains a rather polarizing mystery.