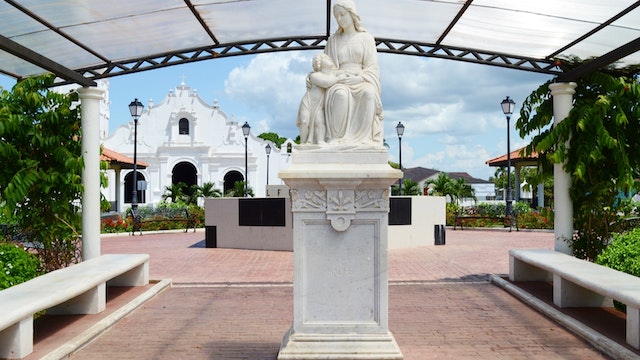 Natá's principal draw is this 16th-century cathedral, thought to be the oldest church built in the Americas still in use today. Indigenous artisans did all the woodcarving in the church, including the six side altars and the remarkable pulpit. A close look at the altar dedicated to the Virgin Mary to the left of the main one shows the culture's influence in the sculpted fruit, leaves and feathered serpents on its two columns. Behind this altar is the crypt entrance.

The columns in the nave are made of níspero, a hardwood found in Bocas del Toro Province, while the ceiling has been replaced with pine and cedar. The four bells in the belfry date from the 20th century. The originals, made of gold, were stolen years ago. To the left of the entrance is an 18th-century stone baptismal font.

Ecuadorian artist José Samaniego created the Holy Trinity painting to the right of the altar in 1758. For many years it was kept hidden from public view, as it portrays three separate but equal Christ-like individuals and not the usual Father, Son and Holy Spirit – a considerable breach of Roman Catholic dogma. During a 1995 restoration, three skeletons were discovered under the floor beneath the painting. Their identities remain a mystery.