An unofficial map of the Paris metro system shows just how long it takes to get the distance between stops the old-fashioned way. 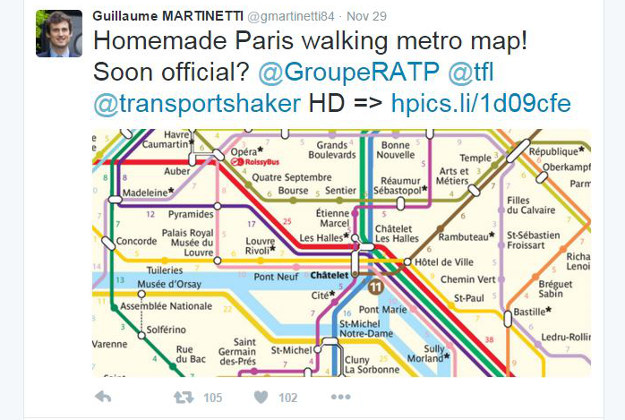 A walking map of the metro was created by transport planner Guillaume Martinetti, who told French news website The Local that the official Paris transport map isn’t perfect and the distances between the locations are not always as long as they appear.

Using information from Google Maps and Paris transportation services, Martinetti created the homemade map and posted it on Twitter, where it was widely shared.

In the UK, a similar map was officially released last month by Transport for London, which showed that many downtown stops are 15 minutes or less away on foot. The map only shows zones one and two, but makes a compelling argument for walking between many famous landmarks.

While the Paris map is not official, both maps can either help travellers save a bit of money on transport costs or see a few more sights by getting around on foot.

See a high definition version of the Paris map: here.