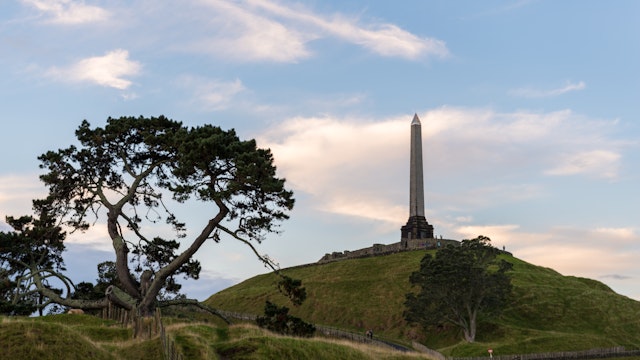 Maungakiekie was the largest and most spiritually significant Māori pā (fortified village) prior to British arrival. At the top of this volcanic cone (at 182m high) there is an obelisk and epic 360-degree views of Auckland and its harbours.

It is also the site of the grave of John Logan Campbell (the ‘father of Auckland’) who gifted the 230-hectare area to the city in 1901. He also requested that a memorial be built to the dispossessed Māori people at the summit.

The 'one tree' cut down

Today there is only a stump of the last ‘one tree’. The original tōtara tree was cut down in 1852 by a Pākehā (white) settler, either because it was significant to the Māori people or because he needed firewood – depending on which account you believe.

In response, John Logan Campbell planted a stand of Monterey pines of which only one lone tree survived. That tree was felled in a chainsaw attack in 2000 by a Māori activist who wanted to raise awareness of the government's fiscal envelope policy – a target to settle all historic Treaty claims for NZ$1 billion – on the anniversary of the signing of the Declaration of Independence.

In 2015 new native trees were planted on the site, with a view to one day having a single pohutukawa or tōtara.

As well as visiting the summit, allow time to explore the surrounding Cornwall Park with its mature trees and historic Acacia Cottage (1841). The Cornwall Park Information Centre has fascinating interactive displays illustrating what the pā would have looked like when 5000 people lived here.

Near the excellent children’s playground, the Stardome offers regular stargazing and planetarium shows (usually 7pm and 8pm Wednesday to Sunday, with extra shows on weekends) that aren’t dependent on Auckland’s fickle weather.

The Māori name Maungakiekie means the mountain where kiekie (a native vine) grows abundantly. The mountain and its surrounds were home to the Te Wai ō Hua iwi (tribe) although other iwi also trace their ancestry to the mountain.

One Tree Hill and U2

Yes, that U2 song from the 1987 album Joshua Tree is about this place too. It was dedicated to the memory of a New Zealander, Greg Carroll, who Bono became friends with after they met in Auckland in 1984. Carroll joined the group as a roadie, moving to Dublin with the band after touring with them in New Zealand, Australia and the US. He was killed in a motorcycle accident in Dublin. The song is referring to the first night in Auckland when he took Bono to One Tree Hill.