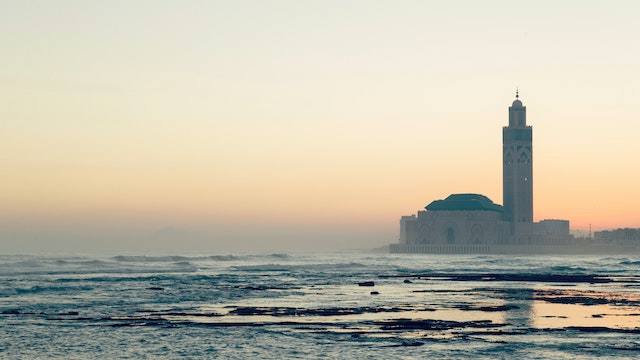 This opulent mosque, built at enormous expense, is set on an outcrop jutting over the ocean with a 210m-tall minaret that's a city landmark. It's a showcase of the finest Moroccan artisanship: hand-carved stone and wood, intricate marble flooring and inlay, gilded cedar ceilings and exquisite zellige (geometric mosaic tilework) abound. It's one of two Moroccan mosques open to non-Muslims; multilanguage guided tours are conducted outside prayer times for modestly clad visitors. There’s also a small museum showcasing the craftwork involved.

One of the largest mosques in Africa, it can hold 105,000 worshippers – 25,000 inside, the rest on the outside courtyards. Built and partially funded by King Hassan II (the remaining funds were gathered through a somewhat controversial public subscription process), the mosque complex was designed by French architect Michel Pinseau, took six years to build and was completed in 1993.

Its dramatic location overhanging the ocean waves echoes verse from the Quran, which states that God’s throne was built upon the water. Believers pray on a floor that can be heated when necessary, and can feel the breeze through the retractable roof in warmer months.

The size and elaborate decoration of the prayer hall is simply spectacular. A team of more than 6000 master craftspeople was assembled to work on the mosque, delicately carving intricate patterns and designs in fragrant cedar wood from the Middle Atlas and pink granite from Agadir. The gates were made from brass and titanium, and the ablution fountains in the basement, which are shaped like huge lotus flowers, were carved from local marble.

To see the interior, visitors must be ‘decently and respectfully dressed’ (knees and upper arms covered); women don’t require a headscarf. Tours last around 45 minutes and are conducted in French, English, German and Spanish, and take in the prayer hall and subterranean ablutions rooms.