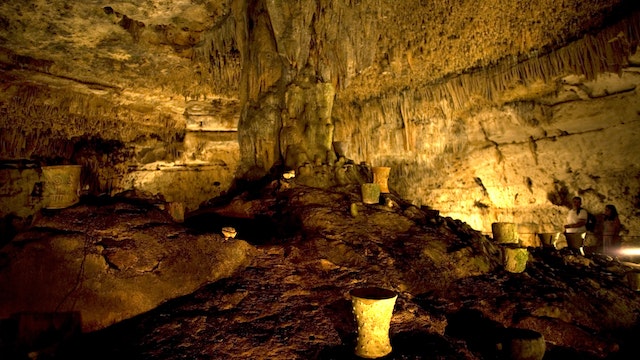 In 1959 a guide to the Chichén Itzá ruins was exploring a cave on his day off when he came upon a narrow passageway. He followed the passageway for 300m, meandering through a series of caverns. In each, perched on mounds amid scores of glistening stalactites, were hundreds of ceremonial treasures the Maya had placed there 800 years earlier. Among the discovered objects were ritual metates and manos (grinding stones), incense burners and pots.

In the years following the discovery, the ancient ceremonial objects were removed and studied. Eventually most of them were returned to the caves, and placed exactly where they were found.

Outside the caves, you’ll find a good botanical garden (displaying native flora with information on the medicinal and other uses of the trees and plants) and a tiny museum. The museum features large photographs taken during the exploration of the caves, and descriptions (in English, Spanish and French) of the Maya religion and the offerings found in the caves. Also on display is text about modern-day Maya ceremonies called Ch’a Chaac, which continue to be held in all the villages on the Yucatán Peninsula during times of drought, and consist mostly of praying and making numerous offerings of food to rain god Chaac. A recent expedition discovered additional artifacts submerged underwater as well.

Compulsory 45-minute tours (minimum six people, maximum 30) have melodramatic, not-very-informative recorded narration that is nearly impossible to make out, but if you’d like it in a particular language, English is at 11am, 1pm and 3pm; Spanish is at 9am, noon, 2pm and 4pm; and French is at 10am.

Be warned that the cave is unusually hot, and ventilation is poor in its further reaches. The lack of oxygen (especially after a few groups have already passed through) makes it difficult to draw a full breath until you’re outside again.

The turnoff for the caverns is 6km east of Chichén Itzá on the highway to Valladolid. Second-class buses heading east from Pisté toward Valladolid will drop you at the Balankanché road. The entrance to the caves is 350m north of the highway.