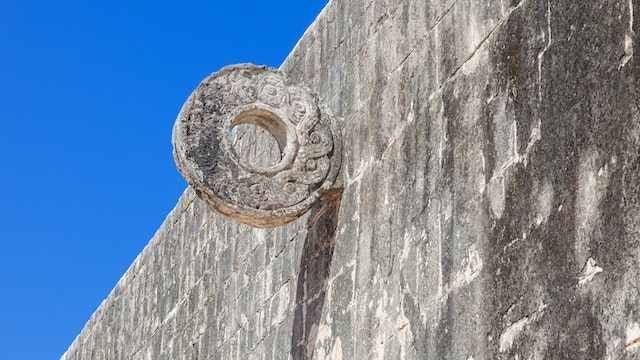 The great ball court, the largest and most impressive in Mexico, is only one of the city’s eight courts, indicative of the importance the games held here. The court, to the left of the visitors center, is flanked by temples at either end and is bounded by towering parallel walls with stone rings cemented up high. Along the walls of the ball court are stone reliefs, including scenes of decapitations of players.

There is evidence that the ball game may have changed over the years. Some carvings show players with padding on their elbows and knees, and it is thought that they played a soccer-like game with a hard rubber ball, with the use of hands forbidden. Other carvings show players wielding bats; it appears that if a player hit the ball through one of the stone hoops, his team was declared the winner. It may be that during the Toltec period, the losing captain, and perhaps his teammates as well, were sacrificed.

The court exhibits some interesting acoustics: a conversation at one end can be heard 135m away at the other, and a clap produces multiple loud echoes.