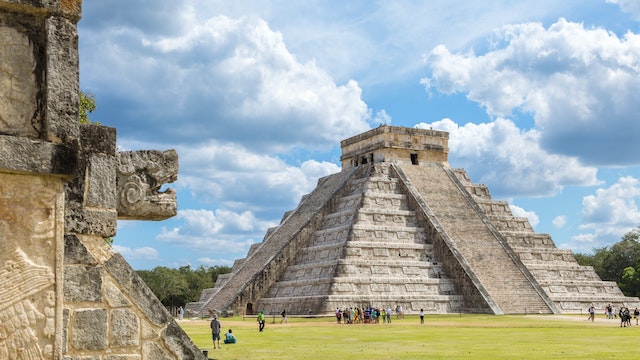 Upon entering Chichén Itzá, El Castillo (aka the Pyramid of Kukulcán) rises before you in all its grandeur. The first temple here was pre-Toltec, built around AD 800, but the present 25m-high structure, built over the old one, has the plumed serpent sculpted along the stairways and Toltec warriors represented in the doorway carvings at the top of the temple. You won’t see the carvings, however, as ascending the pyramid was prohibited after a fatal accident here in 2006.

The structure is actually a massive Maya calendar formed in stone. Each of El Castillo’s nine levels is divided in two by a staircase, making 18 separate terraces that commemorate the 18 20-day months of the Maya Vague Year. The four stairways have 91 steps each; add the top platform and the total is 365, the number of days in the year. On each facade of the pyramid are 52 flat panels, which are reminders of the 52 years in the Maya calendar round.

To top it off, during the spring and autumn equinoxes, light and shadow form a series of triangles on the side of the north staircase that mimic the creep of a serpent (note the carved serpent’s heads flanking the bottom of the staircase).

The older pyramid inside El Castillo has a red jaguar throne with inlaid eyes and spots of jade; also lying behind the screen is a chac-mool (Maya sacrificial stone sculpture). The entrance to El Túnel, the passage up to the throne, is at the base of El Castillo’s north side. You can’t go in, though.

Researchers in 2015 learned that the pyramid most likely sits atop a 20m-deep cenote, which puts the structure at greater risk of collapsing.