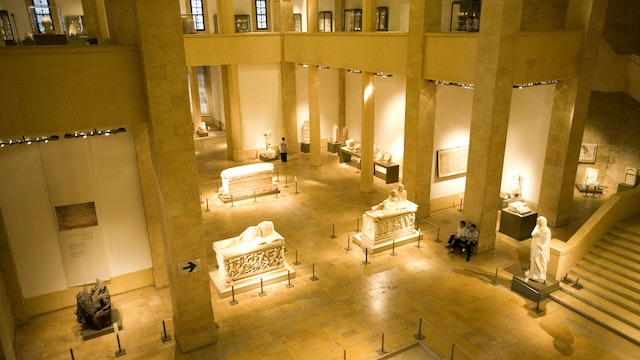 Located on the former Green Line, this is Beirut's major cultural institution. Its impressive, magnificently displayed collection of archaeological artefacts offers a great overview of Lebanon’s history and the civilisations that impacted this cultural crossroads. Highlights include the famous, much-photographed Phoenician gilded bronze figurines found buried near the Obelisk Temple at Byblos; a series of human-faced Phoenician sarcophagi and a frescoed Roman tomb, these latter in the outstanding basement, reopened in 2016.

At the start of your visit, leave your passport at the front desk and borrow one of the museum's complimentary iPads so that you can scan labels on significant pieces in the collection to receive a commentary about each (bring your own headphones if possible). You may also wish to view the 12-minute documentary that is screened in the audiovisual room off the foyer, which plays every hour on the hour between 9am and 4pm. This details how curators saved the museum's collection during the civil war and subsequently restored it to its former glory.

It's worth starting your visit on the upper floor (take the right-hand stairs to go chronologically forwards) as this gives you an overview of the sweep of Lebanese history and lets you sort out your Seleucids from your Phoenicians. The collection of Bronze Age artefacts here is of extraordinary quality: as well as the Byblos figurines, admire the obsidian-and-gold coffer and Egyptian gold pectorals found in the same royal necropolis, and the exquisite ivory make-up boxes from Saida. Other highlights include an extraordinary Attic drinking vessel in the shape of a pig's head; a marble head of Bacchus from the Roman period; and a magnificent collection of Phoenician glass.

On the ground floor, some excellent Byzantine mosaics are notable, as well as two wonderful carved sarcophagi from Tyre dating from the 2nd century AD: one depicts drunken cupids and the other the legend of Achilles. Also here are the much-loved Phoenician statues of baby boys; these were commissioned by aristocrats from Saida as ex-votos to Echmoun, the Phoenican god of healing, to thank him for saving their children.

The atmospheric and beautifully presented basement (easily missed; look behind the stairs) is a standout, holding the eerie series of human-faced sarcophagi from Saida as well as an intriguing reconstruction of a 2nd-century AD collective tomb from Tyre, with wall paintings depicting mythological scenes. Much earlier Chalcolithic pot burials are also interesting, while three evocatively mummified bodies and perfectly preserved clothing tell a poignant 13th-century story. Perhaps fleeing from the Crusader wars, they died in a Qadisha Valley cave still clutching the title deeds to their land, foreshadowing a story repeated in refugee camps across Lebanon today.